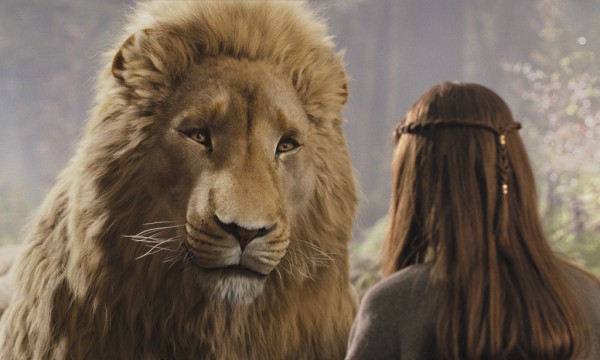 The scriptures and the words of living prophets are the best place to learn about the Savior, His mission and His love. The Savior’s ministry as recorded in the New Testament and his visit to the Nephites as recorded in The Book of Mormon both bear powerful witness of His divinity and the reality of His atonement.

1. Aslan in “The Chronicles of Narnia” series by C.S. Lewis

The lion Aslan in “The Chronicles of Narnia” (including the book “The Lion, the Witch and the Wardrobe”) is an obvious Christ figure. The Christian author of the series, C.S. Lewis, wrote Aslan as an allegorical representation of Jesus Christ. Many of his actions are similar to events in the Savior’s life. Most obviously, instead of allowing the sinful Edmund to be murdered, Aslan sacrifices himself in Edmund’s place. His death involves humiliation and torture, and he is ultimately resurrected. Other parallels between Aslan and Jesus Christ are evident with a close reading of the book.

2. Harry in the “Harry Potter” series by J.K. Rowling

Some Christians avoid the Harry Potter series because of the magic in the book’s fantasy world, but Harry Potter is a Christ figure. In the final book of the series, Harry — who was chosen as a baby as the only one who could defeat the world’s most evil wizard, Voldemort — sacrifices himself to free the world from evil. Like the Savior, Harry is resurrected, and when he is, the evil wizard’s power over Harry’s friends is lessened. Ultimately, he triumphs over Voldemort, just as Christians believe Christ will ultimately triumph over Satan.

3. Gandalf in “The Lord of the Rings” series by J.R.R. Tolkien

The wizard Gandalf in J.R.R. Tolkein’s “Lord of the Rings” series is also a type of Christ. In the first book of the series, Gandalf falls into “Shadow” (or hell) appearing to die. However, he ultimately returns (as Christ was resurrected) and is more powerful than ever when he does. Readers may also see similarities between Gandalf’s voyage into the west at the end of the series and the Savior’s ascension.

4. Phineas in “A Separate Peace” by John Knowles

John Knowles’ “A Separate Peace” is an allegorical story of the Garden of Eden and the Fall. The prep school in the summer is like Adam and Eve’s experience in the Garden of Eden — comfortable and easy, but ultimately destined to end. Later, the prep school becomes like Earth after the fall, and Gene finds himself in need of redemption. In this story, Phineas — or “Finny” — emerges as a Christ figure. Through his death, he ultimately redeems his friend Gene.

5. Simon in “Lord of the Flies” by William Golding

The island in “Lord of the Flies” is a desolate and fallen place, where the basically evil nature of man runs rampant. Among the essentially savage boys, Simon stands in sharp contrast with his thoughtful, kind nature. Like the Savior, he loves and nurtures small children. Perhaps most notably, Simon’s experience in the cave the night before his death has some similarities to the Savior’s experience in the Garden of Gethsemane. Both underwent mental suffering, physical thirst and severe bleeding. Ultimately, Simon was the only one with power to save the boys from themselves, and they reject him.