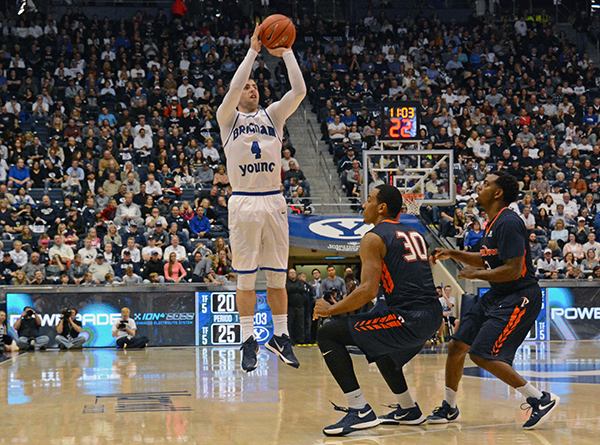 BYU freshman Nick Emery shoots a 3-pointer during a game against Pepperdine. Emery served an LDS mission in Germany before beginning his college career. (Photo by Rebecca Lane)

Signing day revealed a growing trend among LDS athletes across the nation. Recruiting classes for BYU, Utah, Utah State and a host of other schools included a significant number of athletes who will not actually suit up for their respective teams for another two years.

These athletes are instead choosing to serve a mission straight out of high school. Such an option became available when The Church of Jesus Christ of Latter-day Saints lowered the minimal age for missionary service to 18 years old for men and and 19 years old for women in 2012.

It has become a game changer for athletes considering a mission.

“With the age change, it makes kids want to go out sooner rather than later,” Brighton High senior Simi Fehoko said. “That way we can get back more mature. You’ll be a 20 year-old freshman. That’s going to be a huge impact for the recruiting.”

Fehoko is among the growing number of local LDS athletes who plan to serve a mission before enrolling in college. He committed to Stanford and signed a national letter of intent to play football with the Cardinal after his mission ends in 2018.

Going straight out of high school made it easier for Stanford coaches to embrace Fehoko’s decision and work to integrate him into the program two years from now. The coaching staff has promised he will have a scholarship waiting for him when Fehoko returns in 2018 and they are committed to help him stay on top of his fitness and nutrition out in the mission field.

“The Stanford coaches are going to give me a workout plan and they’re going to send me bands and stuff to stretch with,” Fehoko said. “They’ll send me a goal to work on every single day, so I’ll get back fit.”

Athletes who have already served an LDS mission straight out of high school before starting their college careers can foresee advantages to this approach. BYU guard Nick Emery was glad he decided to serve a mission first and then return to play basketball afterward.

[pullquote]”After every season, you look back on the season and what you did good and what you did bad and what you can improve on and work on during the off-season. Leaving out on a mission is definitely a good thing after a year, but you don’t get the experience of going through a year and then being able to improve….” —Nick Emery, BYU freshman guard[/pullquote]

It allowed Emery to focus exclusively on missionary service when he was out in the field. Now, with four uninterrupted seasons ahead of him, Emery feels confident he can focus exclusively on basketball and make faster progress between his first and second year in the program.

That’s good news for BYU considering Emery has already shown signs of being a dominant player. Through 29 games in his freshman season, he is averaging 16 points per game, shooting 38.4 percent from 3-point range and set the Cougar freshman single-game scoring record with 37 points in a 114–89 win at San Francisco.

“After every season, you look back on the season and what you did good and what you did bad and what you can improve on and work on during the off-season,” Emery said. “Leaving out on a mission is definitely a good thing after a year, but you don’t get the experience of going through a year and then being able to improve conditioning or shooting or defense in the off-season to prepare for the next year.”

BYU will soon experience a rare situation next season as a result of the missionary age change. An influx of several returned missionaries — including Emery’s former teammates Eric Mika and TJ Haws — will leave the Cougars with a core group of starters and rotation players that could potentially play together for 3 or 4 years.

For a basketball team that is used to seeing various players depart on missions after one season from one year to the next, it will afford a degree of continuity other programs take for granted.

“It will help our program,” BYU coach Dave Rose said. “That’s what I’m hoping. You look at our roster next year and we should have seven or eight guys that are going to play three straight years together without an interruption. When we had a lot of that (continuity) four or five years ago, we had some really good success with it. We’re hoping we can repeat it or duplicate it and maybe exceed it.”

Rose said when a missionary returns remains the biggest factor in their progress during their first season back in the program. A player who returns in the spring, for example, will have more time to improve their conditioning and learn the playbook so they can hit the ground running when the season starts. A player who returns in the late summer or fall, on the other hand, can face a bumpier transition from the mission to college ball.

Tackling that transition all at once instead of having the first season separated from the rest by a two-year mission can make a steep learning curve easier to handle.

“You learn the system BYU runs and you learn how to play at a whole different level than high school,” BYU freshman forward Jakob Hartsock said. “I’m grateful I have all these four years (in a row). This first year is helping me to understand everything and get into everything. I have the next three years to play while knowing the system.”