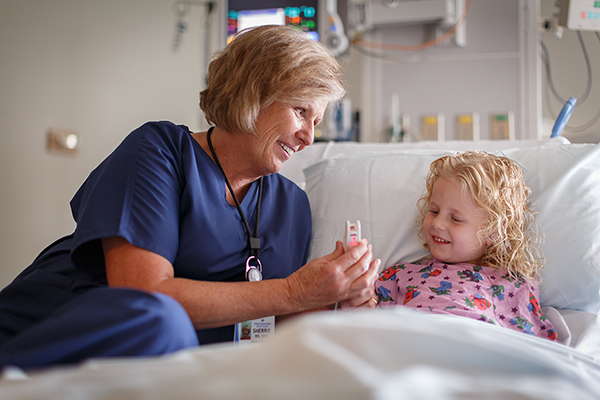 “We are partnered all together with Primary Children’s to provide children’s hospital level care within the scope of our respective hospitals,” said Dr. Russell Osguthorpe, pediatric infectious physician and the pediatric medical director at Utah Valley Hospital.

The partnership was created out of a need for more pediatric care in Utah County. Salt Lake is only 45 miles away from Provo where Utah Valley Hospital is located, but that hour commute can be rough on a family when a child needs consistent medical attention. Not to mention that Utah County has a lot of children.

While the announcement was officially made Tuesday morning, the transformation didn’t happen over night. Throughout the past five years, Utah Valley Hospital has been taking steps to prepare to join the Primary Children’s Network.

This has meant hiring approximately 20 sub-specialists for the Utah Valley Hospital staff.

[pullquote]“And over that five year period we have grown the kinds of doctors that work in our valley. Instead of adult physicians taking care of children, we now have many pediatric sub-specialty physicians taking care of children with very complex healthcare needs.” —Dr. Russell Osguthorpe, pediatric medical director at Utah Valley Hospital[/pullquote]

Additional doctors and specialists doesn’t mean the quality has changed, if anything, it has meant an increase with a staff that can now manage 90+ percent of pediatric health care needs.

“Children’s hospitals around the country have struggled for many years trying to extend their expertise to cities and areas that have lots of children where there are not children’s hospitals,” Dr. Osguthorpe said. “It’s been a big problem all over the country and over the last 10 years many hospitals, Primary Children’s included, have done exactly what we are doing here by extending a branch of its hospital into a local affiliated hospital.”

But the work isn’t done yet. Over the next two years the whole West Building will be getting a facelift in order to help children feel more comfortable from the moment they walk into the hospital.

“The whole West Building will be getting some of that facelift so we can help even from the minute the kid walks through the door to have them feel like they’re in a children’s environment and not an adult hospital — which is very important to Primary Children’s,” Dr. Osguthorpe said. … “It shows a great deal of care and commitment for our hospital leadership.”

This care and commitment to quality children’s care is something Dr. Osguthorpe and his fellow doctors and nurses take seriously. He noted the sign above the entryway at Primary Children’s Hospital that reads, “The child first and always.”

Utah Valley Hospital becoming part of the Primary Children’s Network is what Dr. Osguthorpe refers to as “the cherry on top.”

“It’s just the cherry on top of a whole lot of work by a whole lot of people: administrators, nurses, doctors at both Utah Valley and Primary Children’s who’ve worked countless hours to upgrade and improve our medical care that we provide to children,” Dr. Osguthrope said.

In honor of Utah Valley Hospital’s addition of the Primary Children’s Network, we are holding a Month of Giveaways. See the prizes and enter to win here.

How to engage small children in scripture study Next post