With a “magic” theme, this year’s Fab 40 photo shoots involved three 10-week-old bunnies, a magic wand and oversized playing cards. In addition, most participants brought props that helped tell the story of their fabulousness. (No bunny rabbits were harmed in the making of these photos — but one of them did pee in the corner, and the Utah Valley Magazine high school intern cleaned it up.) Take a trip backstage for an insider’s peek into the magic of Utah County’s 40 most fabulous people. Sheila Morrison, who teaches free swim lessons to special needs children and teens, brought a prop that popped on set — an inflatable swimming toy. (Maybe the spell Alex Murillo cast brought this fish to life so he could read Guy Roche’s sign about the golf fundraiser he’s organizing.) 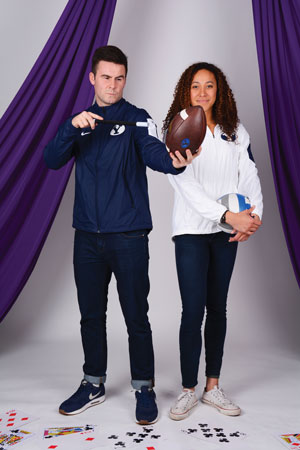 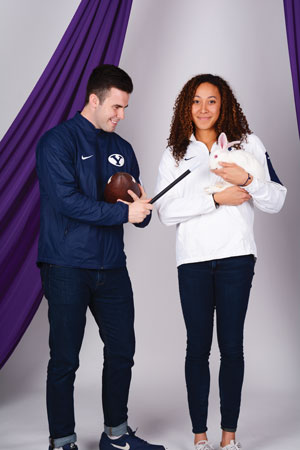 Tanner Mangum and Alexa Gray aren’t just two of BYU’s biggest athletic stars — they’re also dating. Or, they were at the beginning of February. Three weeks after we shot this photo, Tanner proposed to Alexa (on the football field, of course) at the end of February. She said yes, making these photo that much more magical. 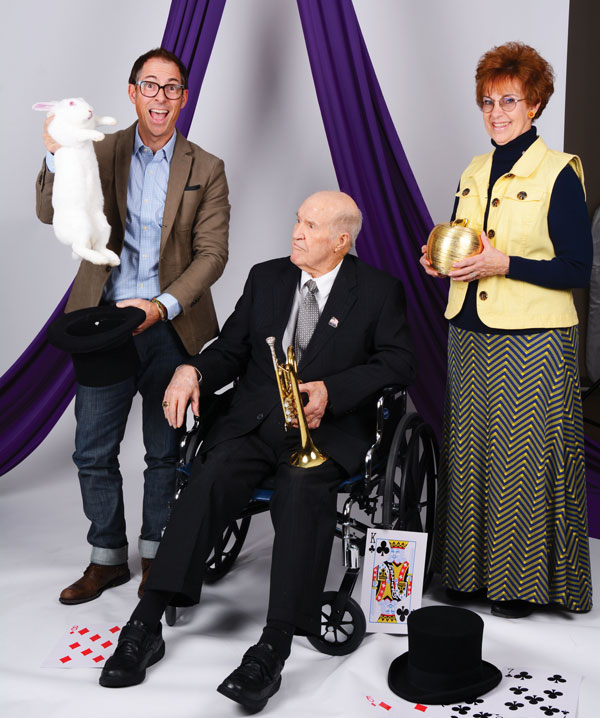 Clem Hancock and Susan Kirby lit up when art teacher James Rees got into character as a pulling-bunnies-from-hats magician. Moments earlier, Clem used his trumpet to serenade the set with a few numbers from his 70-year repertoire. Editor Jeanette Bennett jumped onto the set and behind the drapes to strike a pose with Alex Murillo, owner of Center Stage, and Carter Williams, a dancer at Center Stage. All nine yards of the perfectly purple curtain came from Hancock Fabrics in Orem. 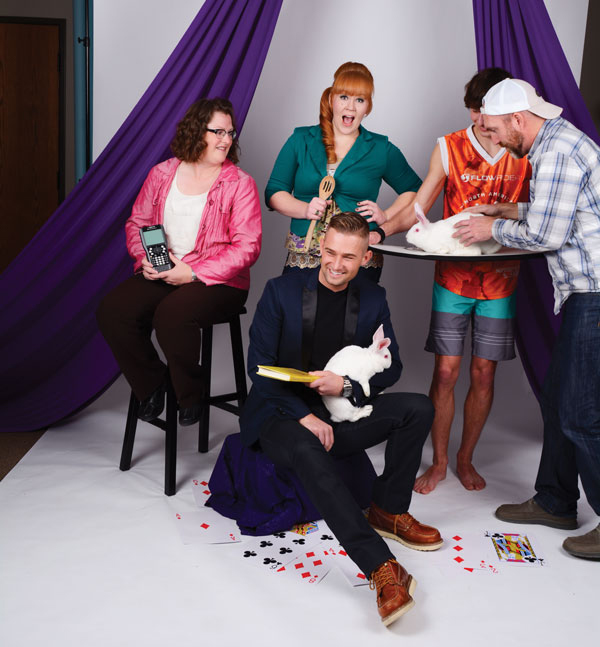 Utah Valley Magazine photographer Dave Blackhurst gingerly placed a bunny on Jake Chipman’s flowboard, where it obediently stayed put until Dave returned it to its pen. Melody Apezteguia, Shannon Abbott and Tyler Beddoes were happy to stand (and sit) by during the bunny boarding process. None of these Fab members had met before the scheduled shoot on a Wednesday afternoon, but that didn’t stop them from freely swapping props for a memorable moment. 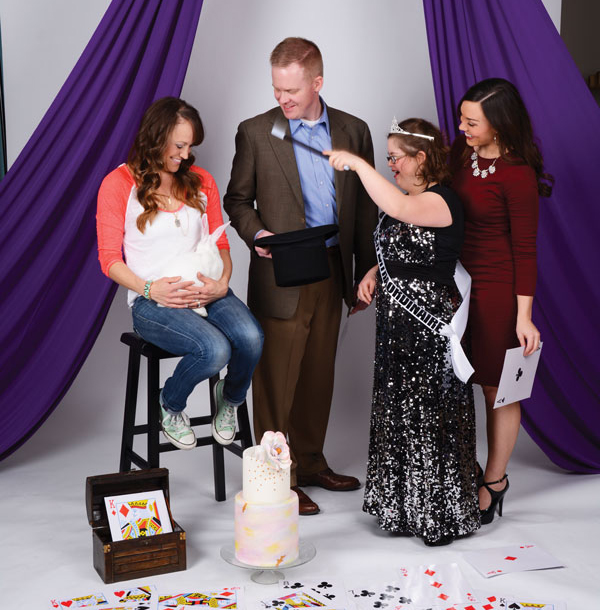 Jenny Russon cried out “Abracadabra” before each photo as she put a spell on the bunny while Fab members Sunny Hintze, Stan Swim and Whitney Talbert-Clayton smiled along. 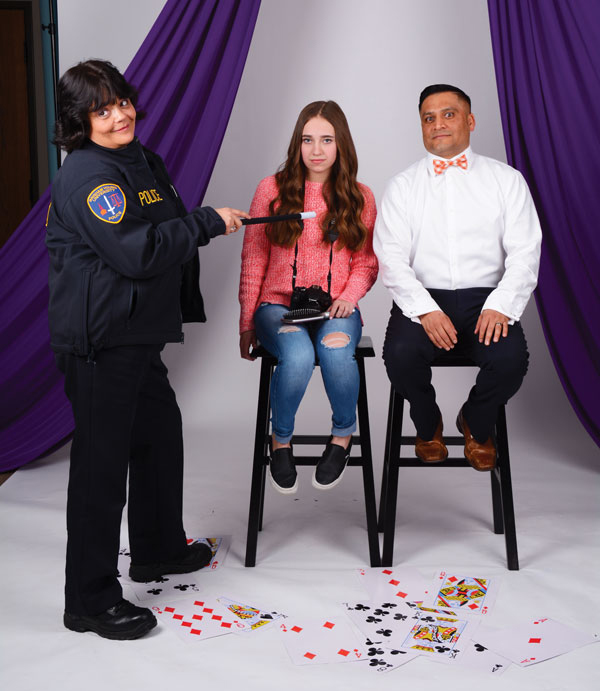 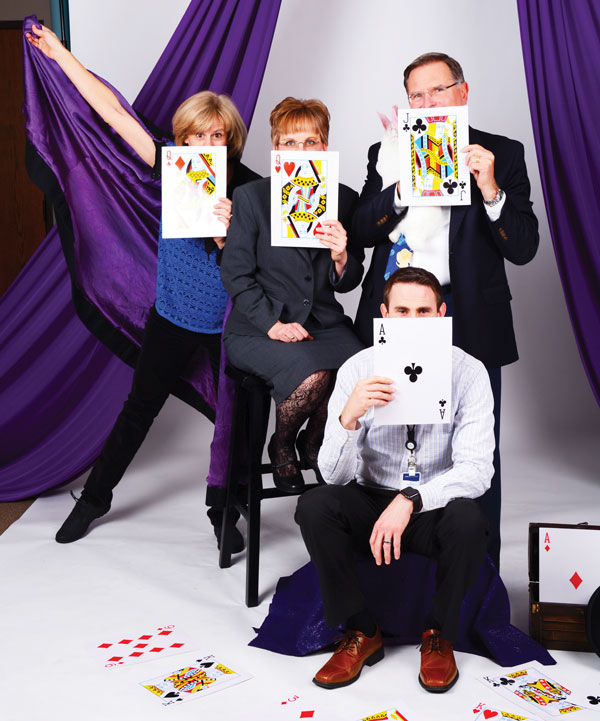 Polly Dunn brought her dancing shoes and skills to the shoot with Kris Doty-Yells, Dean Wright and Josh Rohatinsky. Dean was one of many Fab members who agreed to put their crisp clean clothes at risk to hold a bunny. (Lint brushes were close at hand.) 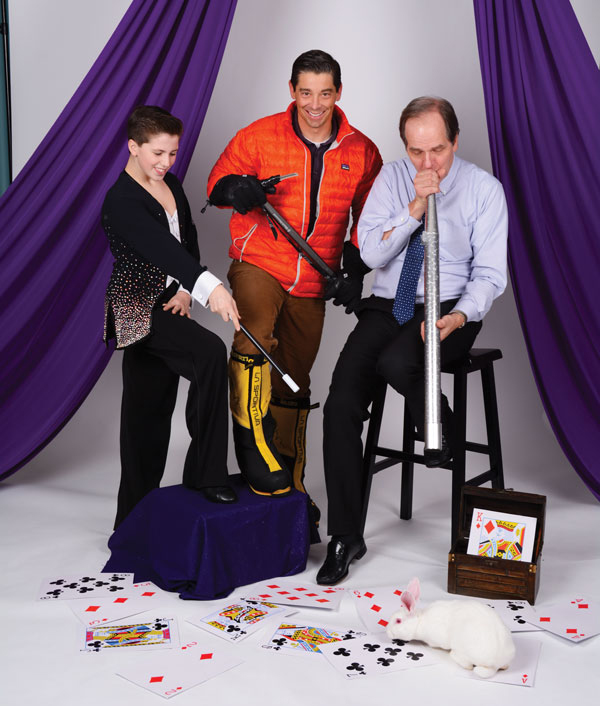 Utah Valley Magazine staffers let the three white bunnies run free for a few minutes during this shoot. Carter Williams, Dave Roskelley and Don Cook improvised when one bunny hopped across the set. An organ pipe from Don’s office turned into a trumpet as he tried to get the bunny to pause for the photo.

11. Pulling out all the props 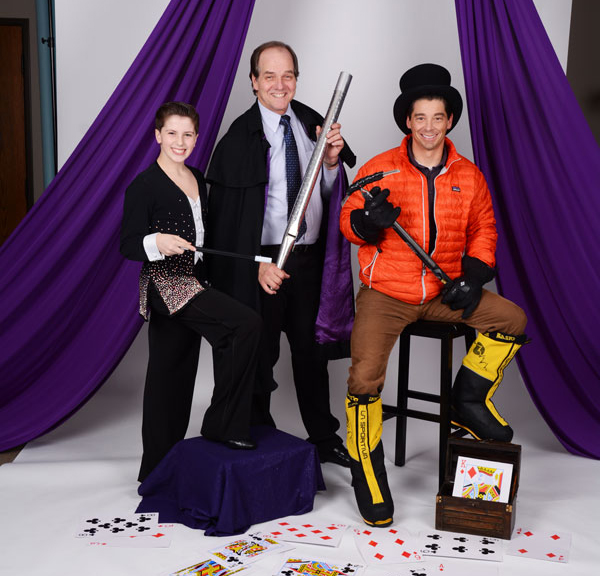 Carter struck a pose, Don donned a cape (from the SCERA) and Dave sported a top hat (from the Hale Center Theater Orem) for a magical outtake. Let’s just say Dave won’t be needing that hat on his summer trip to hike Mt. Kilamanjaro with his sons. Cory Shupe laughed and said, “Like this?” when we suggested he strike a pose with a top hat. Heather Robinson and Michele Welch got into their stage roles by parting the curtains for his grand entrance. 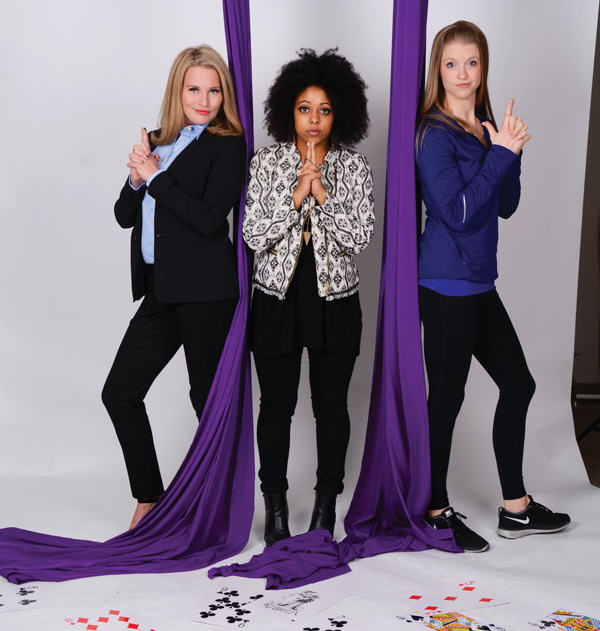 Heather Kahlert, Bri Ray and Megan Murff became quick friends and classic angels in the last shoot of this year’s Fab 40. Megan’s daughter couldn’t get enough of the bunnies just off camera. Phil Davis took on Caitlin Connolly and Larry Baxter in an impromptu tug-of-war contest using the climbing rope brought by Darren Knezek. Who won? We’ll say Darren, because he managed to sit the whole thing out. 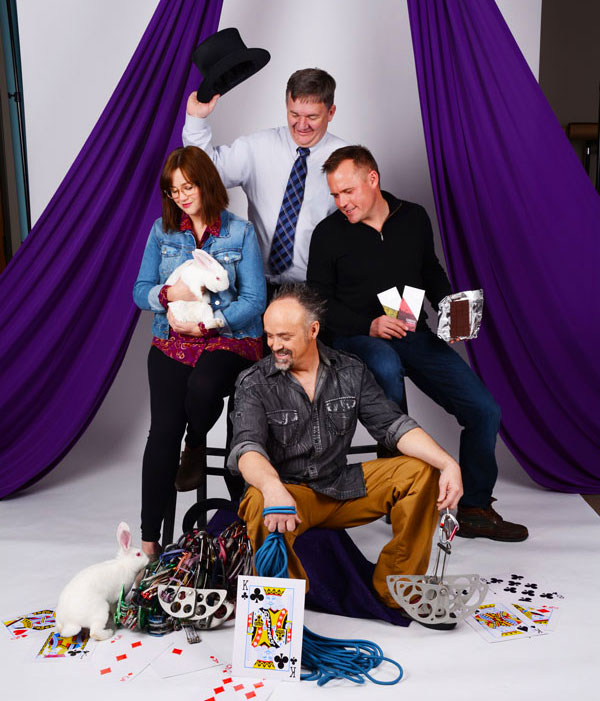 This group couldn’t resist a look at a curious bunny that had hopped onto the set, intrigued by the Darren Kenezek’s climbing gear. A handful of the Fab 40 couldn’t hold the bunnies due to an allergy, but every group was perfectly happy to let the bunnies roam and sniff freely. Jenn Blosil must have known that this tranquil 10-week-old bunny was plotting to misbehave. (The rest of the week the bunny scrambled when being held, had an accident in the corner and made more than a few marks on Utah Valley Magazine staffers.) But he behaved better for the American Idol star and Dave Roberts than in any other photo shoot. Being the first shoot of the week had its perks for this pair.

Learn more about the Fab 40 here.

Fab 40: 40 of the most magical people in Utah Valley Previous post