Jamaal Williams aims to finish what he started at BYU 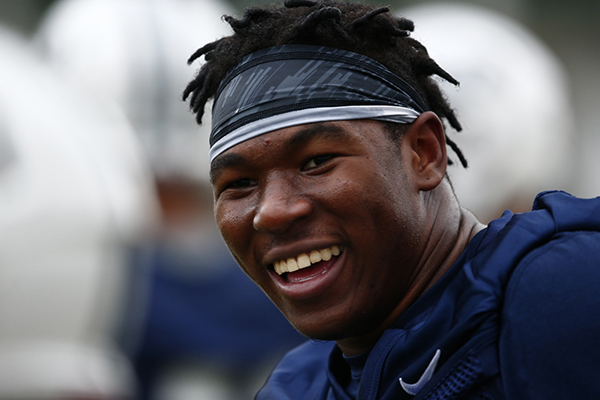 No player could match the infectious enthusiasm Jamaal Williams displayed at BYU’s first spring football practice. Williams broke into a little dance on the sidelines at one point and showed all the signs of someone who was genuinely having fun.

Williams indulging in a little bit of celebration makes total sense when you consider the road he traveled to get back onto the football field. After withdrawing from school and sitting out a year ago, the senior running back feels like he’s back home.

“I love football,” Williams said. “Just being away and coming back, it made it more special just for the first practice. It made it a little more special, being away for so long and then coming back and then putting your helmet on and having fun as usual.”

BYU’s offense was not quite the same without Williams in the backfield last season. The Cougars totaled just 1,668 rushing yards in 13 games. Williams totaled 1,233 rushing yards by himself during his sophomore season in 2013.

An injury-plagued junior season in 2014 prevented Williams from tacking on another 1,000 yard rushing season. He totaled 518 yards while appearing in seven games and making just five starts.

[pullquote]“He’s going to be really good with what we’re going to ask him to do. He’s a very talented player. I know he was excited to be out on the field, it’s been a while for him so he brings that enthusiasm and that attitude.” —Ty Detmer, BYU offensive coordinator[/pullquote]

If he remains healthy in 2016, Williams can expect to add plenty of yards to his career rushing totals. His speed and his ability to run well between the tackles means that Williams will see plenty of touches in BYU’s revamped offense.

“He’s going to be really good with what we’re going to ask him to do,” BYU offensive coordinator Ty Detmer said. “He’s a very talented player. I know he was excited to be out on the field, it’s been a while for him so he brings that enthusiasm and that attitude.”

Williams was reportedly a target of his former BYU coaches who tried to get him to transfer to Virginia for his final season. Going to another school was out of the question. Williams didn’t think twice about re-enrolling at BYU and rejoining the football team for the 2016 season.

Rumors of him leaving Provo ultimately had no substance.

Having Williams in the backfield once again has already made a difference from day one. His teammates already feel motivated to push themselves harder after seeing his competitiveness and his enthusiastic attitude.

The senior is quickly leaving his stamp on younger players and veterans alike.

“Everyone loves Jamaal,” BYU quarterback Tanner Mangum said. “Since he’s been back, he brings a very noticeable energy to the team. Every day in workouts he’s setting the example, both in word and in deed. He’s obviously a leader. He’s been here for a while and knows what he is doing, so it’s fun having him out there. He’s got a good energy about him.”

BYU fans are hopeful that having Williams and his good energy back in the fold will translate to success for the Cougars in Kalani Sitake’s debut season in Provo this fall.

Fab 40: 40 of the most magical people in Utah Valley Next post