The Q Awards: CVX Live named 2016 Marketer of the Year 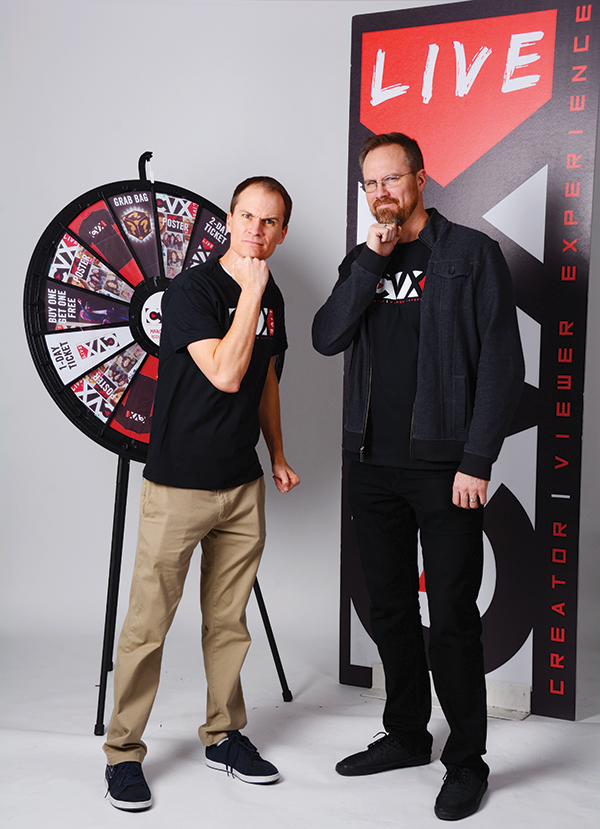 John Roberts (left) and Brett Roberts pack a punch with their marketing moves for CVX Live, which celebrates the YouTube community that they became part of with their Kid History and Bored Shorts brands. (Photo by Dave Blackhurst)

It’s been six years since Kid History launched its YouTube channel — catapulting these kid-voiced silly stories to millions of video views and celebrity status where fans squeal and sob upon meeting these Utah-based movie makers.

Then, in 2015, Kid History (which is now most recognized for its brand of Bored Shorts TV) went live and in person. Understanding the need for online stars to connect with each other and their real, live human fans, the Bored Shorts bros launched CVX Live — a YouTube convention that was the first of its kind in Utah. Dozens of YouTube stars and 6,000 attendees gathered together at the UCCU Center at UVU for video premieres, live performances, meet and greets, and vendor booths. Other conventions of this nature took four years to get that kind of crowd. CVX Live did it in one.

MARKETING MOJO FROM THE BROS

1. Stay on track. “Make sure you measure the return of your marketing. Figure out a way to track everything you do. How will you know if it’s working if you can’t measure the success? (you won’t).”

2. Blame game. “Don’t blame the medium. Every single advertising medium — online, magazine, billboard, etc. — works. It’s simply a matter of finding the right mediums for your business. So before you blame the medium, take a long hard look at your message.”

3. Slowly but surely. “Take it slow. don’t get overwhelmed. You don’t have to be on every single online platform right away. pick your favorite, have a consistent presence, set goals, and have a plan to expand. And please don’t build a crappy website. do it right.”

4. Practice makes perfect. “If you find a winning message — great! But never stop tweaking it. Don’t get in a rut just because something worked a year ago. You can always, always, always make it better.”

“Last year’s event was fantastic,” says John Roberts, one of four real-life brothers who make up the Bored Shorts team (along with “adopted bro” Richard Sharrah). “These presenters are incredibly talented — they have millions of fans in their following. But the live component opens up an entire new experience for our community. View counts are great — but there’s nothing as gratifying as meeting the people who watch your work. You see first-hand the impact you’ve had on their lives.”

CVX Live was such a hit, they’re doing it again March 25-26. Only this time, they’re expecting 10,000 fans. What’s more, they’ve added a Creators Course — an educational track where attendees can learn how to make a living on YouTube.

“We’re so pumped about the education aspect,” says Brett Roberts. “People pay thousands of dollars to get this kind of information, but we’re offering it in one VIP pass. We want to keep everything affordable for youth and families.”

So why Utah Valley? What is it about our happy corridor that’s at play?

“This is such a unique place,” John says. “The fans are great here — they’re people who are willing to get out of their seats and actually go to an event.”

“And there are so many talented YouTubers,” Brett adds. “There are not many places in the world that could have a convention made up of stars who live within two square miles of each other. We have stars coming from out of state as well, but the amount of talent in Utah is a very cool thing to witness. Utahns have always been a people of the arts —and YouTube is just a natural place to showcase talent.”

Marketing of this high-profile magnitude is no easy feat. But the Roberts brothers know stellar marketing starts with a stellar message. When your brand has a purpose, success comes into play.

“Marketing is the key,” Brett says. “It doesn’t matter how amazing your product is.”

Meanwhile, CVX Live is a chance of a lifetime.

Because this kind of history bears repeating, kids.

The Q Awards: Brandon Fugal named 2016 Executive of the Year Next post