The Q Awards: Google Fiber named 2016 Company of the Year 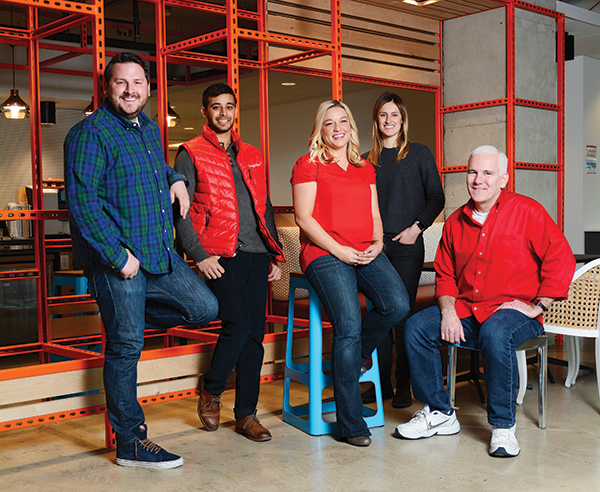 Google Fiber’s offices are a little bit Utah, a little bit California. Devin Baer, far left, is the head of business operations and the associate city manager at Google Fiber.

It’s been two years since Google Fiber officially launched in Provo — bringing with it careers, clout and the cloud of all clouds. And it all started with a phone call.

As the local legend goes, Provo Mayor John Curtis essentially “cold called” Google to see if they’d like to purchase iProvo, the forceful (but fledging) fiber network built by the city. Google searched, and the results were in: They did, indeed. Google Fiber purchased iProvo for $1 in 2013, and spent the next year upgrading the network and making itself at home.

GOOGLE FIBER AT A GLANCE

2. Community connections. Google fiber is here for good. They helped sponsor Startfest, the largest grassroots startup festival. They partnered with Centro Hispano to renovate the classroom where local immigrants can learn life skills, the English language, and digital literacy basics. They hosted Hackers from across the nation in Provo. and they helped the United Way of Utah County with its new digital literacy programs. “It’s the right thing to do,” devin baer says. “the community places a big bet on us, and when we go into the community, we become a part of it.”

3. Give said the little stream. Netflix released a list of the nation’s fastest Internet service providers based on their netflix streaming speed — with Google fiber ranking No. 1. (binge-watchers everywhere say thank you.)

“We couldn’t be more thrilled to be in Provo,” says Devin Baer, head of business operations and the associate city manager at Google Fiber. “The response has been amazing, and the economic benefits we hoped for the community have started to come to fruition.”

“Entrepreneurs are moving to Provo just to get access to the high speeds,” Baer says. “This business environment is energized — exceptional individuals are doing innovative things. We can’t take credit for the success Provo has seen, but we’re humbled to be a small part of it.”

That supportive stance is likely why Google Fiber has been welcomed to Provo with open streets. Their goal was never to dominate, but to belong.

“Our goal has always been to weave ourselves into the fabric of the community,” Baer says. “There is a whole ecosystem in play, and we believe in investing in that and bettering our surroundings through community involvement and service. We don’t want to throw money at problems. We want to work with our new neighbors in creating real solutions.”

Much like the mind-blowing transition from dial-up to broadband, a fiber network is the next real game-changer that will solidify Provo on the map.

“This infrastructure changes communities. Resources will flow, and people will migrate here to develop for the future,” Baer says. “We hope super fast Internet speeds will help lift the community by changing the way we think about education, healthcare, and other industries. It can serve as a platform for job creation and innovation. The Fiber to the Home Council has already concluded that communities with access to fiber speeds have a higher GDP than those that do not. The ripple effects are real.”

Our favorite ripple? Making a splash for small businesses.

“A fiber network levels the playing field — it’s the great equalizer. Even a decade ago, small businesses had to adopt technology that was not only bulky, but incredibly expensive. The pizza shop on the corner had difficulty competing. But now many of these tools are accessible, affordable, cloud-based and abundant — and everyone has a shot at shining,” Baer says. “This is a good thing. We want to give all businesses an opportunity to show us just what they can do.”

The Q Awards: John Pestana named Entrepreneur of the Year Next post