BYU’s new offense already a hit with the team 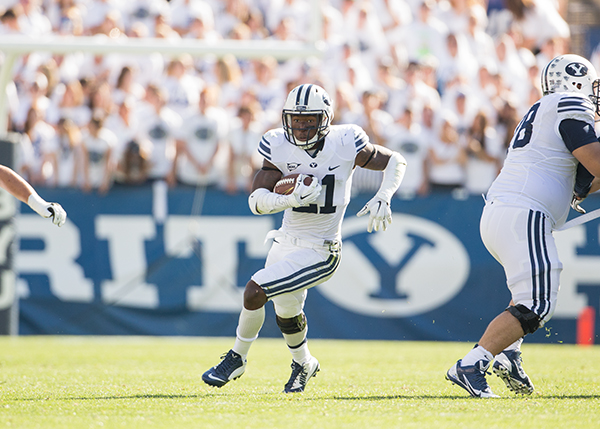 Jamaal Williams carries the ball up the field in a 2014 game against Virginia. (Photo by Jaren Wilkey/BYU)

BYU will not be suffering any identity crisis on offense this season. The Cougars have dusted off a familiar playbook under new offensive coordinator Ty Detmer.

Since joining first-year head coach Kalani Sitake’s staff in December, Detmer has installed a pro-style West Coast offense that resembles the scheme BYU ran when LaVell Edwards still roamed the sidelines. It represents a significant departure from some of the concepts and schemes used in the hurry-up offense that the Cougars ran under former offensive coordinator Robert Anae.

BYU’s new offense will put the quarterback under center more often. Players will huddle between plays instead of always looking to the sidelines for the next play call.

It’s a change some offensive veterans are welcoming.

“I can breathe,” BYU running back Jamaal Williams said. “I don’t have to worry about looking to the sidelines anymore. Looking at the pictures and everything. It was good and all, but now we get to huddle. We get to crack jokes in the huddle, take our time going to the line. Once we get up there, it’s full speed. I like it a lot. I like being back there, seven yards back, being able to look at the whole defense and know exactly where I’m going.”

The Cougars have some building blocks in place to do good things on offense in 2016. BYU ranked fourth among FBS teams in 2015 in red zone offense, boasting a 94.3 percent scoring rate on drives inside the red zone. With Tanner Mangum at quarterback, the Cougars also finished 21st overall in passing offense (296.5 yards per game).

[pullquote]“I can breathe. I don’t have to worry about looking to the sidelines anymore. … It was good and all, but now we get to huddle. We get to crack jokes in the huddle, take our time going to the line. Once we get up there, it’s full speed.” —Jamaal Williams, BYU running back[/pullquote]

For BYU, the real issues were generating yardage on ground and limiting turnovers. The Cougars ranked 111th among FBS teams in rushing offense last season (128.3 yards per game). They also ranked 51st in turnover margin, with 22 takeaways and 20 turnovers.

A deeper and healthier backfield in 2016 – headlined by Williams and fellow senior Algernon Brown — should reduce some of those problems this time around. Another favorable factor is the simplicity of the offense itself.

There hasn’t been a steep learning curve with what Detmer has introduced so far in spring camp. The motions and verbiage are different on some plays. Most of the playbook, however, contains concepts that are both familiar to BYU’s offensive leaders and play to their strengths.

Absorbing the key concepts in the playbook and making the offense feel second nature is the primary goal for BYU’s offensive leaders right now. Fine tuning the nuances of various routes and schemes is a goal for summer and fall.

“The main thing is having a command of the offense,” Mangum said. “There’s a lot of pieces that go into it. A lot of weight on the quarterback’s shoulders. Being able to make calls at the line, see the coverage, call out the protection — things like that. That’s the main goal for me: being able to just have that command where I can get up to the line, know what I’m doing and not have to be thinking a lot.”

BYU will feature improved depth at several offensive skill positions this season. It means the Cougars could have multiple dynamic playmakers to draw on to make Detmer’s offense work — something that has not always been a luxury in past seasons.

Competition for those spots will be heated, since the new coaching staff is determined to mold the Cougars into a more fearsome group on both sides of the ball.

“I’m not going to make a statement and say this is what we’re going to do offensively or defensively until we get the best 11,” BYU coach Kalani Sitake said. “I guess that’s a statement: the best will play. We’re trying to see what the combination of those players will be.”

If the Cougars can keep their key playmakers healthy in 2016, BYU’s throwback offense might be just the thing that helps the team take a leap forward.