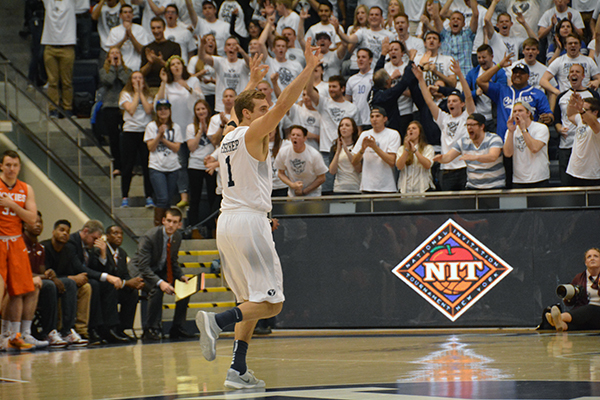 BYU senior Chase Fischer flashes the crowd a three after scoring a 3-pointer in BYU’s NIT game against Virginia Tech. Fischer scored the last 12 points of the game for the Cougars. (Photo by Rebecca Lane)

BYU’s basketball team is advancing to the third round of the National Invitation Tournament after beating Virginia Tech 80–77 Friday night in the Marriott Center — and it was a narrow escape with the win.

Once again BYU senior captains Chase Fischer and Kyle Collisnworth were the ones who pulled the team out of what Fischer described as a “junk yard battle” game.

“I honestly don’t think about it too much because I’m a free flowing human,” Fischer said. “I just like to think and move and not think about stuff. I feel a responsibility and I know Kyle does too. He steps up a lot and saves our team, so I was just trying to make plays for my team when they needed it.”

Fischer led the team in scoring for the night with 24 points, but he credits Collinsworth for helping BYU shake off its jitters and focus on scoring, especially from the free-throw line.

In the first half, BYU struggled from the line. As a team BYU only hit 5-of-11 free throws, a painful 45.5 percent. However, the second half was a night-and-day difference with the Cougars shooting 82.6 percent from the free-throw line, which started with Collinsworth attacking the basket and making all six on his free throws in the second half.

[pullquote]”I feel a responsibility and I know Kyle (Collinsworth) does too. He steps up a lot and saves our team, so I was just trying to make plays for my team when they needed it.” —Chase Fischer, BYU senior[/pullquote]

Collinsworth finished the night with a double-double (18 points, 10 assists); more than half of Collinsworth’s points came from free throws (10 points from 10-of-13 free-throw attempts).

Beyond the seniors, Fischer expressed how impressed he with is with freshmen Nick Emery and Zac Seljaas who have been composed in these tight games that come down to a couple of buckets. Virginia Tech had the lead 73–72  with 5:12 remaining in the game. Both of the freshman contributed to the play a minute later that put BYU in the lead: Seljaas stole the ball and Emery assisted Fischer on a made three.

Collinsworth, Fischer and Rose couldn’t say enough about the ear-deafening crowd at the Marriott Center cheering on the team.

“When you make the NIT with a program like BYU, even for you guys and us, it’s a little bit like you want to hang your head,” Fischer said. “But this is a great tournament and I want to thank our fans because that was honestly the loudest I’ve even heard it all year. I think that’s big and I think a lot of teams don’t want to come in here to play. Not that it makes them scared, but maybe it does.”

Collinsworth added, “I think it does.”

“We’ve had lunch together and (Sitake) told me he loves basketball,” Rose said, even though he didn’t notice Sitake hanging out with the students. “He said he was a great basketball player as a younger guy and then his body grew out of basketball. He told me he would be to most all the games he could, so that’s fun. Those students must have had a good time with him.”

Another win, another game. The Cougars will have another home game next Tuesday for the National Invitational Tournament quarterfinals against the winner of Creighton and Wagner game — and the Cougars are taking advantage of what Collinsworth says is a “new opportunity.”

“When we lost to Gonzaga and we knew we weren’t going to make the tournament there’s two options: put your head down and feel bad for yourself and quit or create a new opportunity,” Collinsworth said. “That’s something I’ve embraced the past couple of years with hurting my knee is I found new opportunities when things got bad and I think that’s what our team did. Chase and I have been harping on the team that this is a new opportunity. Maybe in the (NCAA) tournament we play one game and be done, but here we get to play five. So bad things happen. When things are bad, you just need to create a new opportunity and that’s what we are doing is taking it one game at a time.”

Out Back: Fishing in the mountains provides solitude in Utah's crowds Next post