The accidental alliance between BYU basketball and Gonzaga 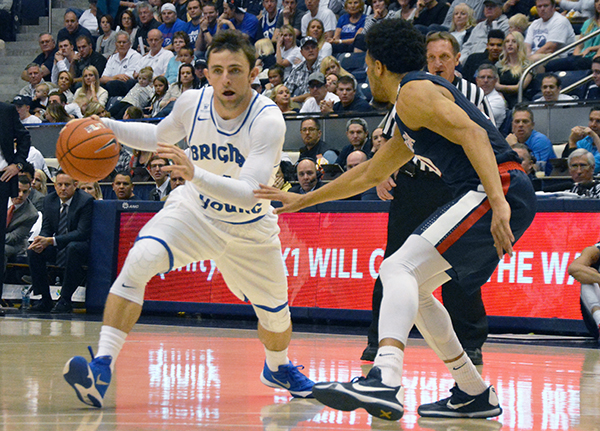 BYU freshman Nick Emery dribbles past Gonzaga’s Silas Melson in a game at the Marriott Center. (Photo by Rebecca Lane)

Gonzaga fans have found themselves in a new alliance for March Madness and, ironically, the cheering is coming from BYU fans.

Following BYU’s loss to Gonzaga at the West Coast Conference semifinals — officially cutting BYU from its NCAA Tournament dreams — reports circulated about the mutual respect between the two teams.

In the press conference following the aforementioned game, Gonzaga senior standout Kyle Wiltjer was asked whether Gonzaga considered BYU a rival. While both teams sit at the top of the WCC and the teams play tight games and split this year’s conference games, Wiltjer said they weren’t rivals.

“I don’t know if it’s really a rivalry because in a rivalry you have to really hate the other side,” Wiltjer said. “Those guys are some nice kids. I mean I remember one time I was at the foul line and one of them said, ‘It’s OK, Kyle, you’ve got this next time.’ They are nice guys, hats off to them for showing tremendous amount of character even after the game. They are just really respectful.”

So, why would a team that crushed BYU’s 2016 NCAA tournament dreams now have the devotion of the same heartbroken fans?

That alone would put some truth to the saying, “Nothing unites two people like a common enemy.”

But the tipping point came from an unintentional direction. Many BYU fans pledged their allegiance to Gonzaga for the remainder of the 2016 NCAA tournament after the Gonzaga managers accidentally threw some shade at Utah on Twitter.

Safety first! The game ball that sent the Zags to the Sweet Sixteen is making its way back to Spokane #NotDoneYet pic.twitter.com/hVHilYIVI6

Unbeknownst — or maybe they really did know — to the managers was that BYU fans were well acquainted with the phrase “safety first.” In January, the hashtag #SafetyFirst was trending on Twitter after Utah coach Larry Krystkowiak felt is was unsafe for his players to continue to play BYU. BYU used #SafetyFirst to mock the Ute basketball team. The Gonzaga managers seem to have regretted the wording of their initial tweet, and later clarified on Twitter:

For the official record, no intentional jabs were takin at Utah, we just wanted the ball to make it back home safely! #GoZags

But BYU fans were already hooked.

Not to mention, that the mutual respect between the two programs has unfolded even further over the past couple of weeks. Gonzaga coach Mark Few boldly spoke out against the lower teams in the WCC.

“Our league needs to really step back and take notice,” Few told The Spokesman-Review. “It’s time for some of these other institutions to start picking it up. They’re really dragging the top three down.”

“I would say that Mark’s been in the league long enough and has been enough that he can have an opinion on that. If that’s his opinion, I think they all ought to listen to him to see what we can do to change it.”

All three teams Few considers the top three of the WCC — Gonzaga, BYU and Saint Mary’s — are still playing in their respective post-season tournaments. Gonzaga is in the Sweet 16 and both BYU and Saint Mary’s has advanced to the quarterfinals of the National Invitation Tournament.

“I think that it’s a good league, especially at the top,” Rose said. “I think that the success in the post season hopefully allows us to continue to grow, continue to get better. We have a lot of uncertainty in our league right now. We have some teams that are in the post season winning and then we have a lot of teams looking for a coach. Hopefully, we can build it up and get it going again.”

Until next year, rise and shout to the WCC cause and the BYU-Gonzaga alliance.

Caucus 101: What you need to know for Utah's GOP caucus Tuesday Previous post