Home LDS Being LDS From Boston Strong to Mason Strong: An insider’s look at how Elder Wells was built for survival

From Boston Strong to Mason Strong: An insider’s look at how Elder Wells was built for survival 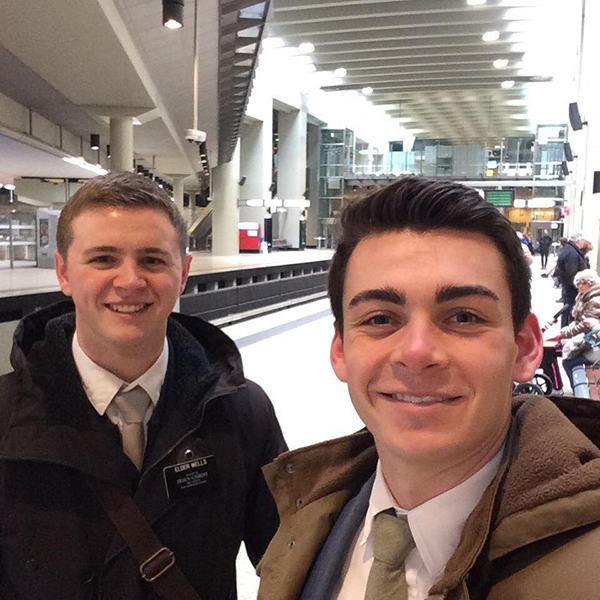 Elder Mason Wells (left) and Elder Joseph Empey were both seriously injured in the bombing at the Brussels airport. (Photo courtesy Chad Wells via Facebook)

Reporter Jeff Call has known Elder Mason Wells and his family since before he survived the Boston Marathon bombing and now the bombing at the Brussels airport. Jeff explains why Elder Mason’s character is not only Boston Strong, but Mason Strong.

That day in June 2012 at the Cedar Hills West Stake Center cultural hall, the three boys, wearing scout uniforms and eager to receive their Eagle Scout awards, started to look more like young men than young boys to me.

Two of them were my sons, Ryan and Brayden, and the third was Mason Wells.

The Wells family and our family put together an Eagle Court of Honor that Sunday afternoon and dozens of friends and family turned out to show their support. It was a memorable day for both of our families.

As Chad, Mason’s dad, and I presented the Eagle Awards to our boys, we were so proud of their accomplishments and we were brimming with excitement about their potential. At that moment, it was like watching them straddle the line between their childhood and their future.

I remembered the effort they expended to earn their Eagle Awards. Chad and I had attended Summer Camps with our sons, watching them scramble from one merit badge class to the next, form lifelong bonds of friendship with their troop, get caked in layers of dirt, cultivate leadership skills, and share testimonies at nightly devotionals.

I remember thinking how this generation of young men is much more prepared for the future, and is so much stronger, than I was at their age. In my mind, there’s no doubt that this generation has been reserved to come to earth in these latter days to learn, serve, perform miracles and help usher in the Savior’s Second Coming.

[pullquote]”He said he wanted us to know he was blessed because he was right next to the bomb.” —Kymberly Wells, Mason’s mom[/pullquote]

The Wells family had been in our ward for many years and they lived behind us before they moved to Sandy a couple of years ago. Mason and Ryan both graduated from Lone Peak High in 2014. Growing up, they had played on the same Junior Jazz, church ball and little league football teams. Mason is a bright, confident, charismatic young man.

All three — Mason, Ryan and Brayden — are currently serving missions.

When I awoke Tuesday morning to the stunning news that three missionaries had been injured in the horrific, senseless terror attack in Brussels, Belgium, my heart sank. Then when the Church released the names of those missionaries and I read that one of those was Mason Wells — who is serving in the France Paris Mission — feelings of grief, anger and disbelief washed over me all at once.

Like so many others like me who love the Wells family, I immediately offered up prayers for Mason and for his parents, Chad and Kym, and their family. I cannot imagine what it must have been like to receive that phone call from Mason’s mission president.

Certainly it’s times like these that remind us that we’re all part of the same eternal family. What happens to one of us happens to all of us.

As a parent of missionaries myself, I’ve learned that when you send out your children in the Lord’s service, they are in the Lord’s hands. With all of the dangers that exist in the world, clinging to that faith is the only way we can cope sometimes, knowing our children could be in harm’s way any time, anywhere.

In January, my wife and I ran into Chad and Kym at a wedding reception. Since they had moved from Cedar Hills, we don’t see them as much anymore and to be able to talk to them that night was a thrill. We updated each other on our missionaries’ progress and we shared with each other the peace and joy that comes with having children on missions.

Weeks prior to that, Paris had been rocked by terrorist attacks and we were all relived and grateful that Mason was safe.

In 2013, Chad, Kym and Mason were in Boston during the infamous Boston Marathon bombing. Kym ran in the Boston Marathon that year. I happened to be watching CNN at home when Chad was interviewed live by Wolf Blitzer as an eyewitness that day. Fortunately, the Wells were not injured.

Meanwhile, overnight, the great city of Boston pulled together, vowing to be “Boston Strong” in the face of such a terrible tragedy.

[pullquote]”We spoke with his comp and they are going to be fine although Elder Joe Empey told me that Mason got it the worst of all the missionaries. Mason did suffer some heavy blood loss and also minor burns but he is going to pull through this.” —Chad Wells, Mason’s dad[/pullquote]

The Wells must be one strong family to have gone through that then, and to be going through this painful experience with Mason now.

“I just talked to him,” shared Mason’s mom Kymberly Wells. “Mason said his Achilles tendon was ruptured, he has burns on right hand and side of head, and says they aren’t too bad. He said he wanted us to know he was blessed because he was right next to the bomb.”

And knowing Mason’s indomitable spirit, all of us who know the Wells are coming together “Mason Strong” as he confronts this ordeal.

That was the essence of the message Chad posted in an update on his Facebook page late Tuesday morning:

“Elder Mason Wells is safe in the hospital with bomb shrapnel trauma to his foot and minor to head. He is just out of surgery and are waiting further info. We spoke with his comp and they are going to be fine although Elder Joe Empey told me that Mason got it the worst of all the missionaries. Mason did suffer some heavy blood loss and also minor burns but he is going to pull through this. We thank all of our wonderful family and friends for your loving prayers and concern. It means so much to us and Mason. He is a strong young man and will pull through this better off in the end. God bless our son and God bless our missionaries.”

Thanks, Wells family for your friendship, your example and your expression of faith at this difficult time. We love you. And we stand with you — even if it’s on our knees.