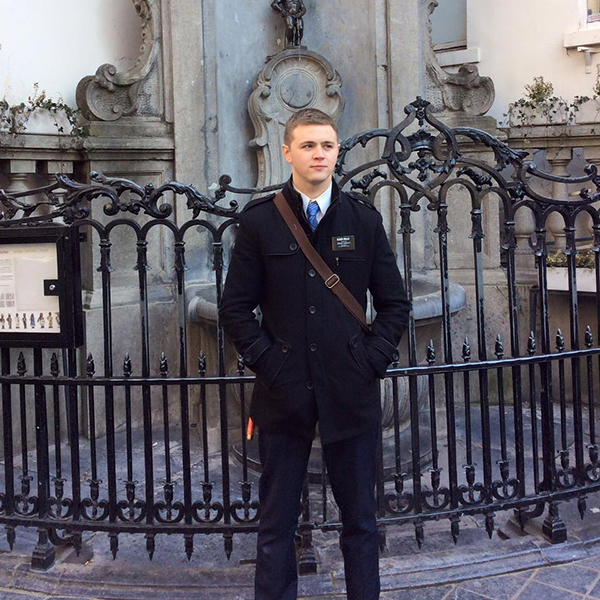 Elder Mason Wells is one of three missionaries who were seriously injured in the explosion at the Brussels airport Tuesday morning. He is serving an LDS mission in Paris, France. (Photo courtesy Kymberly Snowden Wells)

Elder Mason Wells (19), a 2014 graduate of Lone Peak High School, and Elder Richard Norby (66) of Lehi, Utah were among three LDS missionaries injured during the terror attacks at the Brussels airport this morning.

“I just talked to him,” Kymberly Snowden Wells, Mason’s mom, told us. “Mason said his Achilles tendon was ruptured, he has burns on right hand and side of head, and says they aren’t too bad. He said he wanted us to know he was blessed because he was right next to the bomb. He sounded tired.”

[pullquote]”Mason said his Achilles tendon was ruptured, he has burns on right hand and side of head, and says they aren’t too bad. He said he wanted us to know he was blessed because he was right next to the bomb.” —Kymberly Snowden Wells, injured missionary’s mom[/pullquote]

The three had been accompanying a fourth missionary, Sister Fanny Rachel Clain (20) of Montélimar, France, who was on her way to a mission assignment in Ohio, and who had already passed through airport security. However, the LDS Church learned at 12 p.m. MDT that Sister Clain was also hospitalized with minor injuries.

Sister Clain had been serving in that mission while awaiting a permanent visa for the United States.

All missionaries in the France Paris Mission have been asked to remain in their apartments.

The First Presidency of the Church promptly issued a statement this morning in response to the bombings:

“With much of the world, we awoke this morning to the heartbreaking news of the bombings in Belgium. Our prayers are with the families of the deceased and injured, including three of our missionaries who were injured and hospitalized. We also pray for the people of Belgium and France as they continue to deal with the uncertainty and devastation caused by the recent terrorist attacks.”

Updated at 12:30 p.m. to include new information on Sister Clain.

Updated at 1:15 p.m. to include more information on Elder Wells’ injuries from Kymberly Wells.

From Boston Strong to Mason Strong: An insider's look at how Elder Wells was built for survival Next post