Home LDS Being LDS A sports lover’s guide: How to make the most of general conference

A sports lover’s guide: How to make the most of general conference 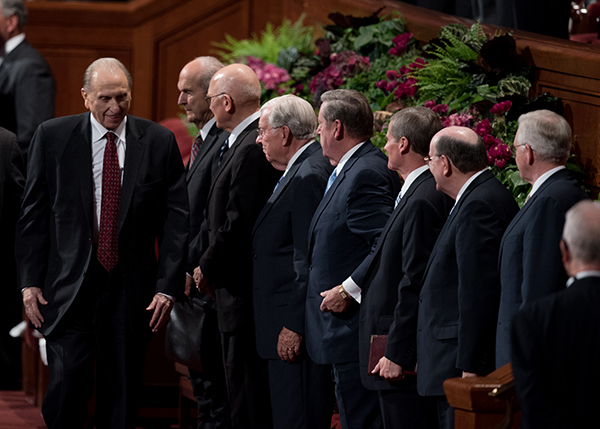 LDS Church President Thomas S. Monson walks past members of the Quorum of the Twelve at the Conference Center in Salt Lake following a session of general conference. (Photo courtesy LDS Church)

Growing up, I found it vexing that LDS general conference coincided with some of the best times of the sports year — April and October.

I’ve always been a man for all seasons — basketball, baseball and football. In April, there’s the start of the Major League Baseball season and the NCAA basketball tournament Final Four. In October, there’s the end of the baseball regular season and pennant races, and we’re smack dab in the middle of the college football season.

During the Saturday conference sessions as a kid, I’d be thinking about games that were on TV that I was missing. I’d ask my parents if I could change the channel momentarily during the hymns or during the statistical report.

The answer was always a firm “No.”

Sometimes I had to be lured to the priesthood session with the promise of an ice cream sundae afterwards.

Well, my perspective of general conference changed dramatically while spending two months at the Missionary Training Center. General Conference took place a couple of weeks before I was to leave for the mission field. Sitting there among a large army of fellow missionaries, I hung on every word and soaked up every minute of conference. I took notes during each talk, and I remember thinking how great general conference was that year for some reason.

Later, I realized that maybe I had been missing out all of those years.

So what was the difference? It was my attitude and desire. I was hungering and thirsting for gospel knowledge and for the things of the Spirit. Unfortunately, we don’t always have that attitude.

Elder Dallin H. Oaks referred to this issue several years ago when he said, “I believe many of us are overnourished on entertainment junk food and undernourished on the bread of life.”

We must make general conference a priority in our lives by taking steps to prepare for it. Whenever I approach conference hungering and thirsting for knowledge, and for answers, and for the Holy Ghost, I am always filled. When I am enduring trials and seek his divine assistance, the Lord speaks to me, and blesses me, through the words of the living prophets. On many occasions, I’ve received answers to prayers and personal revelation during General Conference.

So how can we prepare to get the most out of General Conference? Remember when the great prophet, King Benjamin, addressed his people in that famous conference session of about 124 B.C.? We can find some suggestions about how the Saints prepared in those days.

First, going into general conference, we need to make a sacrifice, perhaps taking time to fast and pray beforehand, asking the Lord to bless us with the Spirit to soften our hearts and illuminate our minds. With that kind of approach, we’re apt to listen carefully. That way, when we are taught a principle of the gospel through the Spirit, we will commit to live our lives in harmony with that principle.

Second, we need to plan to watch conference together as a family, without distractions. Though we’re in the comfort of our homes, we need to make the atmosphere during conference similar to a meeting held in a church. My MTC president, and former neighbor, George Durrant, said he puts on his nicest suit and finds the hardest chair he can find to watch conference.

After the first general conference of the Church in 1830, just months after the Church was organized, the Times and Seasons reported of that meeting of about 30 members at Peter Whitmer’s farm in Fayette, N.Y.: “Much exhortation and instruction was given and the Holy Spirit was poured out upon us in a miraculous manner. Many of our number prophesied, whilst others had the heavens opened to their view. The goodness and the condescension of a merciful God created within us a sensation of rapturous gratitude and inspired us with fresh zeal and energy in the cause of truth.”

That describes how I feel after general conference.

As a husband, father and member of this church, I need to be edified and strengthened through the messages of general conference. Now, the first weekends in April and October are some of my favorite times of the year — for reasons that have nothing to do with sports.

I’m glad my sons are old enough to attend priesthood session with me to feast upon the words of Christ, then, for dessert, go out for an ice cream sundae.