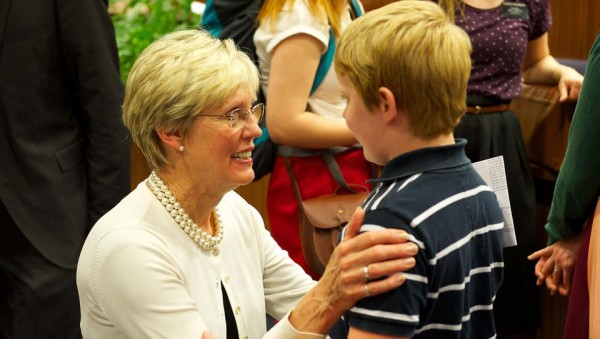 Sister Rosemary M. Wixom, who served as Primary general president from April 2010 until her release on April 2, 2016, served during a period of great excitement and progress for The Church of Jesus Christ of Latter-day Saints. During her time as president, the Church faced monumental decisions, the challenges of an ever-growing church and almost constant media attention.

Sister Wixom, her counselors, and other female leaders of the Church contributed to this progress in significant ways. Here are five highlights from Sister Wixom’s tenure.

The online-only 2014 Auxiliary Training was the first of its kind. Instead of a live training limited to those in the Salt Lake area, the annual training was available online in multiple languages at the same time.

“We’ve tried it the last couple of years to have our training prepared in a way that it could go out, and now it seems like it is the right time to provide this online training for Relief Society and for Young Women and for Primary,” Sister Wixom said.

“As we counseled together we all came to the conclusion that it begins for girls when they turn eight years old, when they take upon themselves the baptismal covenant,” Sister Wixom said. “Children are growing up faster now than ever before and they bring an energy and openness.”

Wixom and the Church’s other female leaders said that the changes would give women and girls opportunity for “advancement and progression.”

3. Public opinion on women in the Church

President Thomas S. Monson made the announcement that officially lowered the minimum age for missionary service in October 2012, but many Church leaders were involved in the decision. Among those involved were Sister Wixom and other female leaders.

“That was a marvelous experience,” Sister Linda K. Burton said in the conversation mentioned above. “At one point in that committee meeting, Elder Nelson stopped and said, ‘We don’t want to hear from anyone except the sisters.’ Then one by one, he asked us our opinion.”

Hear the conversation about this experience at about 2:30 in the video above.

5. Celebration of 100 years of scouting

The Church and the Boy Scouts of America celebrated 100 years of scouting together in October 2013. They commemorated the event with a program titled “A Century of Honor.”

Sister Wixom introduced the program alongside Brother David L. Beck, general president of the Young Men’s organization. The celebration was held in the Conference Center in Salt Lake City and was a reflection of the Church and scouting and how the values and principles have remained constant during the last 100 years of partnership.

6. Continuation of the Church’s involvement with Boy Scouts of America

The Church announced in July 2015 that it would “continue to evaluate” its relationship with the Boy Scouts of America following policy changes within the BSA organization. A few weeks later, the Church announced that it would continue its relationship with BSA for the time being. These discussions were significant to Sister Wixom, who worked closely with BSA in her calling as Primary general president.