Eagle Mountain looking for its next Woman of the Year 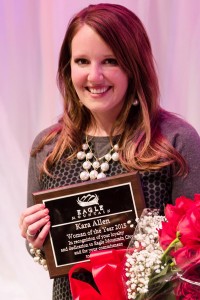 Every year Eagle Mountain honors a woman who shines in the community — someone who’s a business owner, community leader or volunteer, but oftentimes all three.

“We have a number of outstanding women in Eagle Mountain, and I’m glad this award continues to be presented in conjunction with the pageant,” said Linda Peterson, city spokeswoman. “It’s important that they be recognized.”

Nominees “span the whole spectrum,” she said. But they all are focused on the community.

So far this year there have been about 12 nominations, Peterson said. Every year there are usually at least 10 submissions.

Last year’s winner was Kara Allen. She owns a business — Kara’s Party Ideas, is a published author, has three children and does charity work, including helping an orphanage in Mexico. She started a campaign for young women called 60 Days of Service, coordinating with youth leaders to do random acts of service and encouraging young women to do their own and post on social media to inspire others.

Other winners include Sheena Ballard, who works with special needs children at her dance studio and with The Cupcake Charity, which serves people in need in the community;  DJ Conger, who volunteers in schools, church, the fire department and other community organizations; and Donna Anderson, who together with her husband opened one of the first businesses in the city, Village Pizza.

If you know a woman who stands out in Eagle Mountain, there’s still time to nominate her; the deadline is April 13. The award will be announced at the Miss Eagle Mountain Pageant on April 16. The recipient gets a plaque presented by the mayor, and recognition in the city newsletter. To nominate a woman, go to emcity.seamlessdocs.comx.