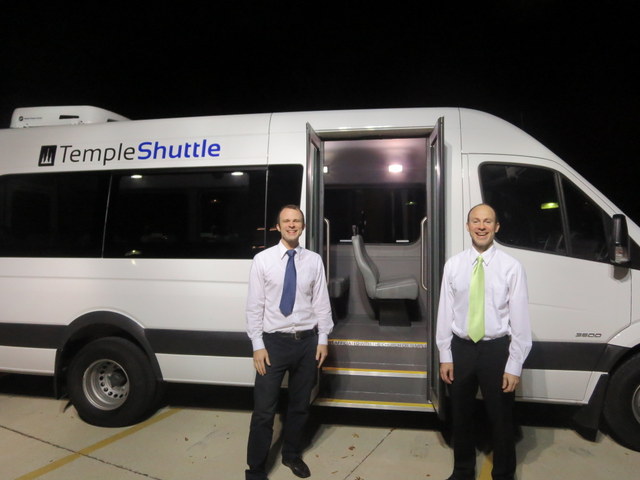 Steve and Paul Saunders created a shuttle system from Virginia to the Washington D.C. temple.

For D.C.-area Latter-day Saints, a weeknight trip to the temple requires careful planning. In the midst of rush hour, a 10-mile drive to the temple can take anywhere from a half an hour to an hour and a half. A minor accident on the beltway can lead to standstill traffic and make it impossible for local Church members to arrive in time for an evening temple session.

It began with a question posed in the parking lot of the Washington D.C. temple after the brothers had finished their weekly volunteer shift: If there are so many devoted Latter-day Saints in the D.C. area, why is temple attendance so low?

“We decided it had to be traffic,” Steve said. “We’re both originally from here, and we’re well aware of how bad the traffic gets. We figured, if people could bypass the traffic, they could get to the temple during rush hour — that particular time of day is crucial for temple attendance, since most people can’t go during the weekday.”

Additionally, the brothers knew of others who faced obstacles in getting to the temple — people who don’t have cars, like the many young single adults attending school or working in the city, and those simply visiting D.C. from out of town and hoping to see the temple.

[pullquote]“The thing we hear most often is, “If it weren’t for the temple shuttle, we wouldn’t have come to the temple.’” —Steve Saunders, co-founder of Temple Shuttle[/pullquote]

So the brothers came up with a solution: a travel service that would combine existing public transportation (which doesn’t extend as far as the temple) with a new, free shuttle.

They founded the business as a nonprofit, created a website, applied for grants, and took a trip to New York to bring home their eBay-purchased shuttle.

To perfect their system, the brothers experimented and timed a variety of travel combinations. The end result is a shuttle that begins each evening at the Forest Glen Metro stop, then spends the evening traveling to the temple and back to the Metro again — as many times as is needed throughout the night.

“It was mostly a matter of deciding, ‘Let’s just do this — let’s try it out,’” Steve says. “And from the very first day we had riders. Since then we’ve had such a strong response that we’ve never looked back. Ever since we started we just imagined filling the endowment room and seeing the temple overflowing with people.”

On the average weeknight, Steve and Paul provide about 55 rides — totaling more than 10,000 rides in the shuttle’s short lifetime.