Home LDS Being LDS LDS or Mormon: Brian Billick’s confusion during his time at BYU

LDS or Mormon: Brian Billick’s confusion during his time at BYU 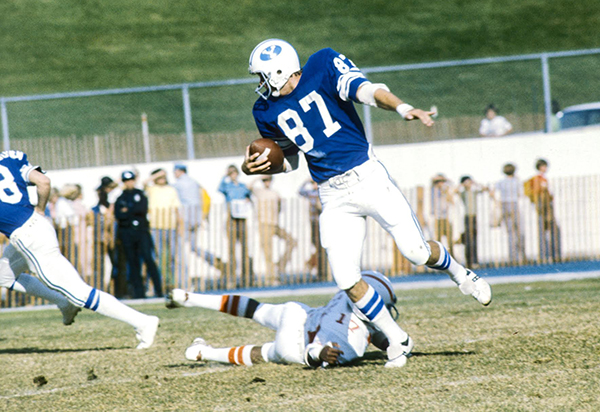 Brian Billick played for the BYU football team between 1974-76. (Photo by BYU Photo)

Brian Billick, who led the Baltimore Ravens to a Super Bowl championship as a head coach in 2000, arrived at BYU in the 1970s.

He wasn’t a member of The Church of Jesus Christ of Latter-day Saints and didn’t know much about the school or the school’s sponsoring church.

Billick had spent his freshman year as a linebacker at the Air Force Academy. The 6-foot-5, 230-pounder transferred to BYU to play tight end, telling friends that he left Air Force because he realized, after enrolling there, that he was too tall to become a fighter pilot.

But he didn’t know what he was getting into at BYU — which made for some amusing misunderstandings.

Once I had the opportunity to interview Billick, and I asked him about his adjustment to BYU when he first arrived.

[pullquote]”I’m thinking, ‘This must be a co-theological university. There’s the Mormons and the LDS.’ I go on like this for a couple of weeks, not piecing it together.” —Brian Billick, former BYU football player[/pullquote]

“I knew that it was a Mormon school,” he recalled. “I’ll tell you an embarrassing story. I got up there in January. I’m new and lost and I don’t know what’s going on. I came out of the Air Force Academy, so I had short hair. They automatically think, ‘This guy’s going to fit right in.’ I’m sizing it all up and I’m at the Smith Fieldhouse and I see all these guys running around with ‘LDS’ on their shirts, which I had come to learn is Latter-day Saints. Well, I’m thinking, ‘This must be a co-theological university. There’s the Mormons and the LDS.’ I go on like this for a couple of weeks, not piecing it together.

“I get to the dining hall and there was a young lady. Being a red-blooded American young male, I sat down and struck up a conversation, trying to make small talk. I ask her, ‘Are you Mormon or are you LDS?’ She looks at me and says, ‘You’re a football player, aren’t you?’ I learned very quickly that they were the same. But it was an easy transition because of the people. I really enjoyed my time there, once I learned the similarities between the Mormons and the LDS.”

After Billick left coaching, he became a broadcaster. He’s currently an analyst for the NFL Network and NFL.com.

While Billick is not LDS, because of his ties to BYU, there are people who think he is.

“There are a lot of assumptions that way, which is fine with me,” he says. “I’m very proud of my time at BYU. The fact I’m not a member of the Church doesn’t mitigate the fact that I have a huge respect for the Church and its people. My closest advisers now, friends and financially, are all members of the Church. I’ve made some great friendships there.”