Home Things To Do Outdoors Lured In: A case for fly-fishing and bass fishing

Lured In: A case for fly-fishing and bass fishing 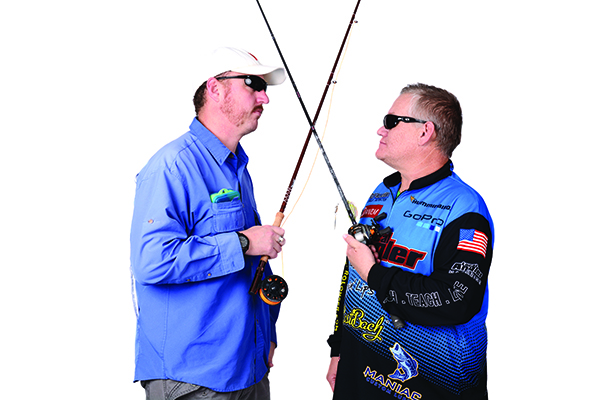 Dave Ballou (left) of Lehi and Clif Gallagher of Eagle Mountain are both passionate about fishing and enjoy the challenge Mother Nature poses. They each take a different approach to which fish they catch and the way they reel them in. (Photo by Dave Blackhurst)

Every year, nearly half a million anglers in Utah put that proverbial sign out for a total of 6 million days and head to the state’s lake, rivers and creeks to hook a little bit of heaven, according to the U.S. Fish & Wildlife Service.

In total, fishing in Utah is a $450 million industry — a big fish tale, you might say, and you’d be hard-pressed to find two characters in the story more devoted than Clif Gallagher and Dave Ballou.

Clif lives in Eagle Mountain and teaches a fly fishing class at UVU. While he enjoys catching trout with his fly rod, his true passion comes from hooking a largemouth bass. He was first introduced to the power of largemouth as a child fishing with his father and brother in Sacramento, California — his hometown. He witnessed a bass take a duckling under the water.

“That was when I first saw the power of those fish,” he says. “They are an ambush predator — like a lion. When a bass hits the lure, it almost pulls the rod from your hand.”

Dave, a policy analyst for Salt Lake County who lives in Lehi, is a “tied-and-true” fly fisherman. He’s loved the challenge of fishing since he was a child.

“My earliest memory is sitting on a rock at Flaming Gorge in the middle of a horrific storm,” he says. “My mom and dad were trying to get me out of the rain, but I wouldn’t move. I spent five hours out there and didn’t catch a thing. The first thing next morning, I was up and couldn’t wait to try again.”

Since then, his game has evolved.

“Knowing they have the skills to feed their families should the need arise doesn’t mean the pair harvest what they catch — bass or trout.

“One of the best parts about catch-and-release fishing is that you can respect your opponent and save the fight for someone else another day,” Clif says. “I’m passionate about the skill of fishing, but I’m also passionate about what fish do for our environment and for other people.”

Now, Dave takes his fly rod everywhere with him, just in case he gets a few spare minutes and can dip his line in a local spot.

“It’s a competition,” Dave says. “It’s the ultimate game of chess. Me against Mother Nature.”

The case for fly-fishing

To say Dave has caught the love of fly-fishing is an understatement. He can’t get enough of the sport. He is constantly looking to improve his techniques and equipment — anything to get an edge in the cat-and-mouse (or fly-and-fish) game he loves.

“I keep journals and can tell you what I caught, where I caught it and how I caught it on any given day,” he says. “It takes work.”

In fact, fly-fishing has encouraged Dave to become an amateur entomologist.

“For some people, fishing is throwing a worm,” he says. “For me, it’s scientific. I do entomological studies of the area. I turn over rocks. I can tell you the life cycle of a large number of insects. Then, I find a fly that will be successful that day.”

Tying flies is another level of the sport that has Dave hooked. In fact, he sees it as an art form that occupies his thoughts even when he’s not on the river.

“Sitting down to a vice and using your knowledge of things — your journals and experience — is a fun challenge,” he says. “You get to make something you think will work at attracting those fish.”

Dave also likes catching a variety of fish. So far, he has caught 26 different species of fish on his fly rod — a number he hopes will keep swimming upwards.

“I have a chart with all the game fish in the state,” he says. “The challenge is always changing. And if I go one state down, the challenge changes again.”

The case for bass fishing

Clif loves to catch a trout now and then, but he prefers the thrill of fighting the strength and cunning of a largemouth bass.

“Bass eat trout,” Clif says. “Why fish trout when you can fish the fist that eats the trout?”

“It takes a lot of skill to target a bass,” he says. “The whole side of their body acts as an ear. They hear very well. It’s the bow hunting of fishing. You have to track them and target them.”

When Clif takes new “fishing investigators” to the lake for bass fishing, he lets the thrill sell them on the sport.

“The people who are attracted to this are competitive and enjoy the challenge of it,” Clif says. “I don’t have to recruit. Once they get their first one, they’re hooked.”

Rooftop Concert Series opens with The Str!ke and The Aces in May Previous post

Everybody has a story: Not so hidden gem Next post