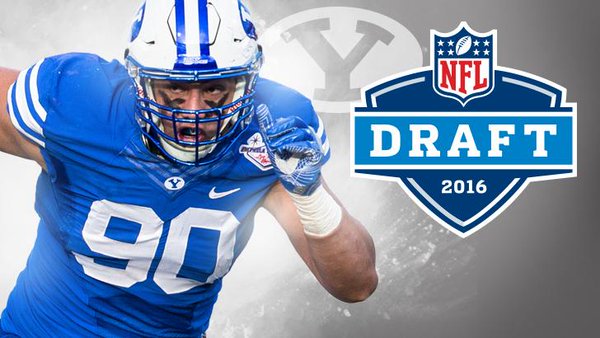 Bronson Kaufusi was the 70th overall pick in the 2016 NFL Draft.

Provo native and BYU football alum Bronson Kaufusi was drafted in the third round of the NFL Draft — 70th overall — Friday night.

“I’m really happy for Bronson,” BYU head coach Kalani Sitake said in a press release. “I’ve known Bronson since he was a child and he’s an incredible person from a great family. I didn’t have the chance to coach him here at BYU, but I did coach against him and know how good of a player he is and how hard he’s worked. He will represent BYU well in the NFL.”

Kaufusi, a defensive end, had a impressive senior season at BYU with 11 sacks and 20 tackles for loss. While at BYU, he played both defensive end and outside linebacker. He totaled 167 tackles, five forced fumbles, three fumble recoveries, and also nabbed two interceptions, including a pick-six during his sophomore season.

Kaufusi, a Timpview High School graduate, is the first Cougar to be drafted since linebacker Kyle Van Noy was the 40th overall pick to the Detroit Lions in 2014. Van Noy joined former Cougar Ezekiel Ansah, who was drafted by the Lions as the No. 5 overall pick in 2013.

Cougar alum Dennis Pitta was drafted to the Ravens in 2010.

Teammate wide receiver Mitch Mathews is also hoping to get drafted to a team during the 2016 NFL Draft.

What a dog taught me about the atonement Next post