Home Sports BYU Will the Lone Peak Three deliver on the hype?

Will the Lone Peak Three deliver on the hype? 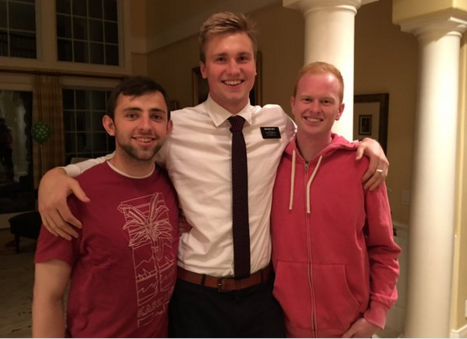 BYU basketball players Nick Emery, Eric Mika and TJ Haws are known as the Lone Peak Three. They will be reunited on the BYU basketball team for the 2016–17 season. (Photo courtesy TJ Haws’ Twitter)

Next year is THE year for BYU basketball.

I hear it and read it everywhere I turn: on Twitter, in news articles, from overheard fan conversations. Whenever a season ends, next year is always the year, and there is nothing wrong with getting hyped up about your team’s future. But I can’t help but wonder, could we possibly be building up the hype of the 2016–17 basketball team too soon?

It’s been more than three years since the three have played together, but BYU fans are talking as if these three can carry the weight of the BYU basketball program on their collective backs and turn in a NCAA Championship in the upcoming year — but that’s not how it’s going to happen.

BYU assistant basketball coach Quincy Lewis coached the Lone Peak Three not only throughout high school, but through summer camps before they even attended Lone Peak.

On May 5, he told BYU Sports Nation, “I’m cautiously enthusiastic about it because you can’t expect TJ and Eric to come back right away to be right where they need to be. It’s going to take some time. And some guys it takes a little bit longer. You can’t always say when that’s going to be.

“One thing I do know about those guys … they are committed to being really, really good. In their minds, their expectations for them is probably higher than anyone else would have an expectation for them. And that’s what you want. … You know that you have some good stuff coming in, but it’s just going to take a little time.”

Of course, I’d never deny that they are talented, nor that they have chemistry from playing together for years. But it’s not about them — it’s about what they are up against. 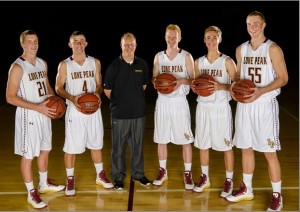 One reason Cougar fans are looking forward to the upcoming season are the number of current roster players who were ranked in the ESPN Top 100 and received a surplus of stars on recruiting sites.

BYU has five ESPN Top 100 players on its current roster: Emery, Haws, Mika, freshman Payton Dastrup and freshman Yoeli Childs — and it took four years to get those five.

The University of Kentucky, ranked third on the “way-too-early” list, has five recruits with their lowest recruit being ranked No. 24. That’s covers BYU’s four years of Top 100 recruits without breaking into Kentucky’s upperclassmen.

You can say it’s not about the numbers, and in part you would be right. Sports take grit, determination and an incredible amount of willpower.

Then you add in BYU’s limited upperclassmen: lone senior Kyle Davis, who averaged 11.9 points and 7.5 rebounds per game in his first season with the Cougars; junior Elijah Bryant, who is a redshirt transfer and has college playing experience; and junior Corbin Kaufusi, who will now split his time with football.

Are the new recruits a special group? Undoubtedly. But the fact remains they have to prove themselves.

Do Cougar basketball fans have something to look forward to? Definitely. But if fans don’t get it into their heads that the fantasy season isn’t going to be this next season, they will trample those dreams before these former Knights and their new teammates make it to the front lines.

Be excited, Cougar fans, just don’t knock them down with your enthusiasm before they have a chance to stand up and prove themselves.

May/June Must-Dos: 7 events you can’t miss in and around Utah Valley Next post