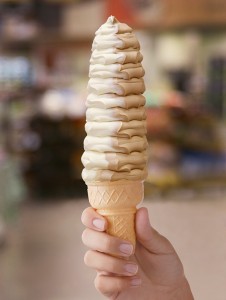 KING OF THE KONES
The Ultimate Kong Kone — a one-pound ice cream cone — has been part of the Macey’s tradition since 1991.

Children in shopping carts, parents needing groceries and teenagers looking for a treat have all been screaming for ice cream at Macey’s over the past quarter century, which is one reason Macey’s was voted Best Groceries for 2016.

Macey’s ice cream is more than your typical ice cream cone — it’s jungle sized. The towering soft serve ice cream is dished up in vanilla, chocolate or twist. And the lick-worthy Kong Kones can be swirled in sizes up to a pound of ice cream.

Macey’s named their original dessert “Kong” after the gorilla who received his education at Ice Cream University and is a personal friend of Curious George. Before there was Kong, the store’s character was a moose.

Ice cream first made an appearance in the Lindon Macey’s Snack Bar — which originally served stadium food such as hot dogs and nachos — in 1986.

In 1991, the Macey’s in Orem expanded to a full service deli, like you see in their chain of stores today, and the Kong Kone was added to the menu.

“We view the ice cream program and Kong Kones as a key element of the offering we have at Macey’s,” Darin says. “We are very proud of the long history we have. It’s just part of the happy shopping experience we have at Macey’s.”