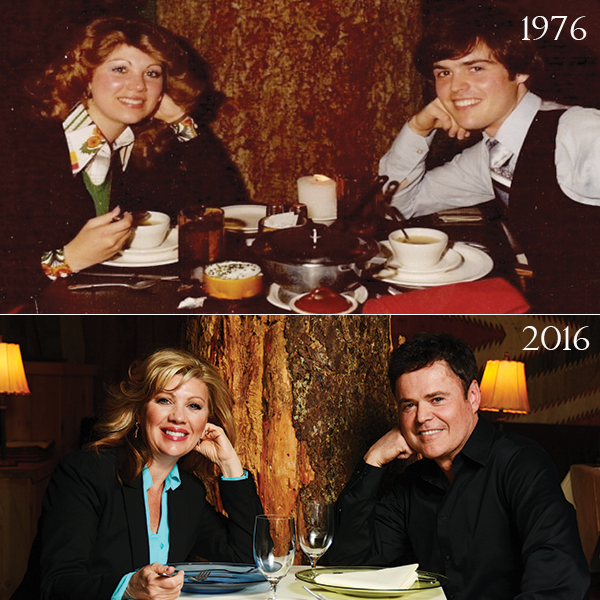 Debbie and Donny Osmond at the Sundance Tree Room at top in 1976 and on the bottom in 2016. (Photo by Dave Blackhurst)

On Debbie’s 17th birthday, Donny planned an elaborate birthday dinner and scavenger hunt, which began at the Tree Room. This was to be the night of their first kiss — and the snapping of the first memorable picture in their young relationship. Exactly 40 years later, Donny and Debbie met Utah Valley Magazine at Sundance to re-create this scene on Debbie’s 57th birthday.

Their first kiss … in Donny’s words

Debbie was playing hard to get, and I wanted to plan something really, really special for our first kiss. I told her a limo would show up at her house at a certain time, and then we were headed to Sundance for dinner.

My brother Wayne just “happened” to be at the restaurant at the same time and said that he just bought a camera and wanted to take a picture of us. So he took a photo and then left to get it developed at Allen’s Camera.

At the end of dinner, the maitre d’ asks, “Is it time?” He hands an envelope to Debbie that tells her she’s going on a scavenger hunt for her presents, and she is to ask me for the next clue. I pull out an envelope that tells her the next clue is under somebody’s chair in this restaurant. The place was packed! She went person to person looking under chairs and finally found it in the middle of the other room.

The next clue led her to a telephone booth. Another clue was in the old Albertson’s store in Provo on the back of frozen peas. She had to go to McDonald’s and sing the Wendy’s theme song before the manager would give her an envelope. The final clue was at Utah Lake on a parking post.

She came back to the limo and read that she could get her final clue from Donny if she gave him a kiss. And it was fireworks, let me tell you! Then I told said that her presents had been sitting on her bed the whole time.

When we walked back in her room, the picture Wayne took of us at Sundance was in a frame. This picture represents that night and the beginning of our relationship.

Here's Donny! Utah Valley's most famous face sings through the verses of his 58 years Next post