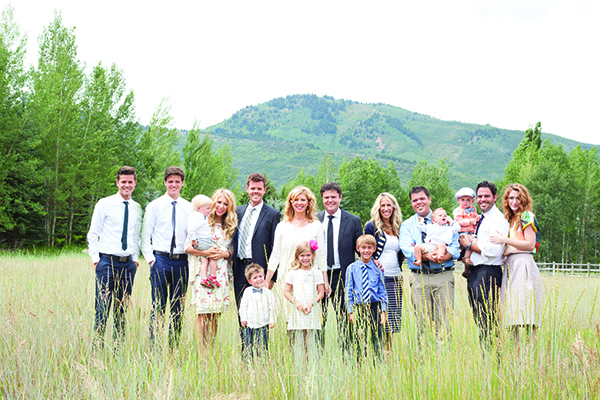 Donny and Debbie Osmond have five sons and eight grandchildren (with only one granddaughter). All five sons graduated from Timpview High School, and Donny has served as a Young Men leader in their LDS ward during much of their growing up years.

Debbie Osmond is often asked around town if she’s related to Donny Osmond. Sometimes she says “Yes, but so are about 500 other people!” She normalizes her experience of being married to Utah Valley’s most famous face and wants to do the same for their five boys and eight grandchildren.

And now that “normal” includes a nearly empty nest as her last of five boys graduates from Timpview this month.

“We had 50 kids here the other night having a big dance party in my living room until 1 in the morning,” she says. “The other night all the grandkids were here and threw the cushions off the couch and began jumping on them. And that is family to me! I never wanted to have a stuffy home. We are party central.”

[pullquote]”I never wanted to have a stuffy home. We are party central.” —Debbie Osmond[/pullquote]

Debbie’s life consists of a five-year run as Primary chorister, mastermind behind a home remodel, Donny’s confidante and now an entrepreneur with Donny Osmond Home. She studied interior design at BYU and has always loved furnishings and been a do-it-yourselfer.

“We’ve chosen to separate Donny’s career from our family life,” she says. “We didn’t want to raise our kids in Hollywood and be surrounded by the entertainment industry.”

She often tells people that she has five boys but that she’s raised six.

“Donny is a fun and crazy dad,” she says.

She tells of him trying to install a zipline from a balcony of their home into their swimming pool. She put a stop to that.

But she’s supportive of his hobbies, which include driving a bobcat around their property. “He should have been a farmer,” she says.