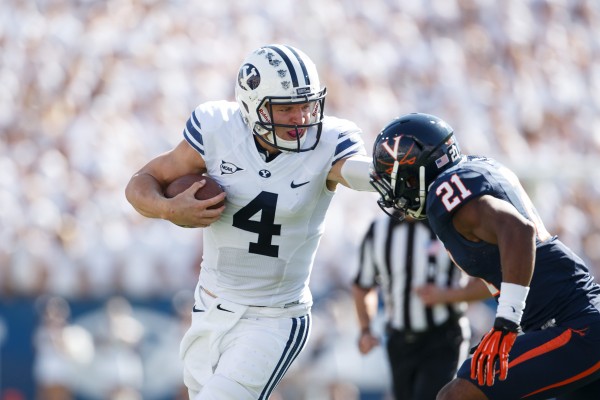 BYU quarterback Taysom Hill announced he is changing his jersey number from No. 4 to No. 7 in honor of his late brother. (Mark Philbrick, BYU Photo)

For the last four years, Taysom Hill has stepped into LaVell Edwards Stadium wearing No. 4 on his back, but this year he will sport a new number that is particularly meaningful to him.

The Brigham Young University quarterback announced on Twitter that this year he will wear the No. 7 in honor of his brother Dexter Hill.

To commemorate the life of my brother Dexter, I am officially changing my number to 7 this year!! #BYUFOOTBALL #7 pic.twitter.com/iXrv6VK4ID

According to an obituary on Legacy.com, Dexter Hill, 31,  passed away on March 25. He had played football at Scottsddale Community College and Dixie State University and sported the No. 7 jersey.

He brought SWAT to Utah and they killed his son-in-law: The award-winning film directed by BYU professors Previous post

Utah-Tube: James the Mormon responds to ‘Trash’ by Neon Trees; plus two new covers by local musicians Next post