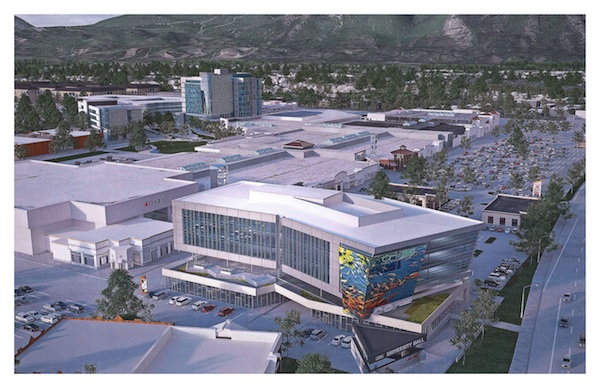 In the front of a rendering of University Place it shows the five-story business complex that will house NorthStar Alarm. (Photo courtesy University Mall)

The new University Place office building has its first tenant and about half of the building is committed, the connector road is being completed and the large performance park will be done later this year — there’s a lot going on at the former University Mall.

NorthStar Home, which provides connected-home and home-security services, is the first business to move into the new office building. It’s taken 30,000 square feet on the top floor of the building, consolidating its two Orem offices into the space.
NorthStar will hold a grand opening on June 2, with public tours.

Eyeglass World and AT&T also have announced they’re moving into the building, Kallas said. AT&T has a store in the mall, and will move into a much bigger space in the new building. About 50 percent of the building is committed now, and “we think the way things are going, we should be pretty much full by the end of the year.”

The ground floor of the building will be store and restaurant space, he added.

Construction on the University Place project is going “very, very good,” Kallas said. It’s a seven-year project and the last year has been spent putting new infrastructure into the ground and getting things ready for more construction.

So far, there’s a new residential building near Costco on the north side of the project. That building is about 80 percent leased, he said. Another residential building should be ready for residents in June, with another one in June next year and the fourth building done the year after that. There’s also a new dog park as part of the residential development, which is open now.

The connector road from 800 East to State Street is nearly finished, Kallas added. And the large performance park on the north side will open Oct. 1.

“We’re getting a lot of interest from companies not in the valley, wanting to know what’s going on, what’s happening,” he said. Those companies are going on a target list.

Next year, probably in February or March, construction will start on a five-story parking garage on the north side of the mall building, he said. It will contain some housing and border the park.

Kallas said he thinks the community will enjoy all the changes.

More than a horse show, what is Cavalia anyway? Previous post

He brought SWAT to Utah and they killed his son-in-law: The award-winning film directed by BYU professors Next post