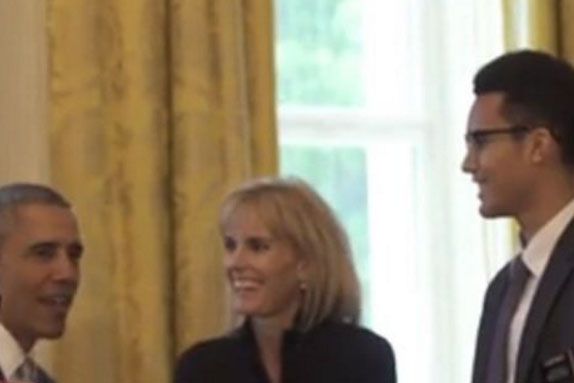 U.S. President Barack Obama, Sindi Bailey and Elder Brendan Bailey at the White House on May 9, 2016. (Photo courtesy of the Bailey family)

Earlier this year Elder Brendan Bailey traded in his basketball shoes for a black LDS missionary name tag and boarded a plane to Washington, D.C. When his father’s former college team came to the city to visit the president, Elder Bailey went along.

In 1983, North Carolina State University won the NCAA championship but did not travel to meet then–President Ronald Reagan because the school declined to pay the travel costs, according to an NCAA article. The only one to meet the president was head coach Jimmy Valvano.

Thurl Bailey, Elder Bailey’s father, played on that championship team. With the help of Utah Sen. Orrin Hatch, Thurl Bailey arranged for the team to visit with the president 33 years after the victory.

“We just thought it would be a really cool opportunity, not just for him but also for the Church, to have a missionary in the White House and have him meet President (Barack) Obama,” said Sindi Bailey, wife of Thurl Bailey and mother of Elder Bailey.

The mission president gave permission and on May 9 Elder Bailey went with the North Carolina State University team to meet the president.

On the day of the visit, Elder Bailey’s companions dropped him off at the White House and his father acted as his companion for the day. Sen. Hatch’s office shared a photo from the visit on Twitter.

Elder Bailey was allowed to wear his missionary nametag throughout the visit.

“Everybody in the White House was asking him about the Church and what he’s doing and what a mission was so it was kind of fun for him because he got to explain to everybody why he’s there,” Sindi Bailey said.

Before leaving on his mission, Elder Bailey graduated from American Fork High School where he played basketball. In October, the 6-foot-7-inch high school senior announced on Twitter that he had committed to Marquette University.

It's time to announce that I will be attending Marquette University to extend my career in Basketball. pic.twitter.com/CN4OkqczaG

Elder Bailey will join the team after he completes his LDS mission.

The North Carolina State University team presented the president with a team jersey with his name and “No. 1” written on the back. The time that had passed between the victory and the meeting made the visit more special.

“I think we appreciate it more, I know I do,” Thurl Bailey said in a YouTube video from the Associated Press. He continued, “I also think it was not necessarily a bad thing that we did not get to go visit back then because now I think it’s that much more enjoyable.”

Since playing for North Carolina State University, Thurl Bailey also played for the Utah Jazz and the Minnesota Timberwolves.

Utah-Tube: Dunkology highlight video by Cosmo the Cougar Next post