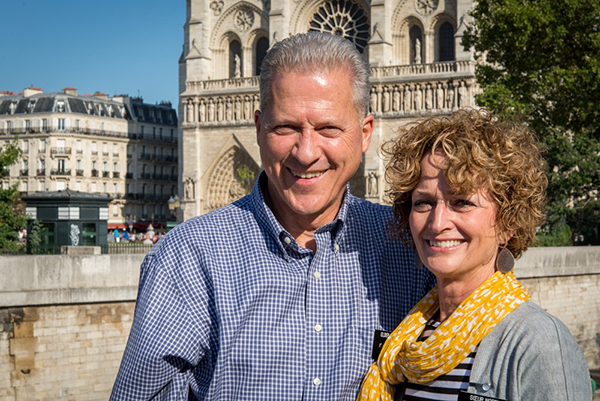 Elder Richard Norby and his wife Pam were serving as Mormon missionaries in Brussels, Belgium. Richard Norby was injured in the Brussels Airport bombing when he was dropping off a sister missionary at the airport. (Photo courtesy LDS Church)

Richard Norby — one of four LDS missionaries injured in the Brussels bombing in March — returned to his home in Lehi on Tuesday. Norby was the last of the missionaries to be released from the hospital and return home.

Norby’s family announced on his Facebook page that the 66 year old was released from the University of Utah Medical Center. The Facebook post noted that Norby’s recovery requires both emotional and physical healing. With the help of his wife, Pam, Richard Norby will continue dressing his leg wounds and work through occupational therapy sessions. He still has significant shrapnel wounds, and his burns and broken left leg are on the road to recovery.

“The outcome for our father remains unseen, but we share his optimism that, ‘It will be OK, whatever OK is. It will be OK,’” the post says.

[pullquote]”The outcome for our father remains unseen, but we share his optimism that, ‘It will be OK, whatever OK is. It will be OK.’” —Norby Family[/pullquote]

On March 22, Richard Norby along with two other missionaries, Mason Wells and Joseph Empey, dropped off Sister Fanny Rachel Clain at the Brussels Airport. All four were injured by the detonated bombs.

While the other missionaries have been released from the hospital over the past couple of months, Richard Norby’s conditions were more serious and required more treatment. Richard Norby was the last of the three elders caught in the bombing, who are all from Utah, to fly back to the United States and be treated at the University of Utah Medical Center in Salt Lake. Following the bombing, Richard Norby was placed in a medically induced coma for four days. Richard Norby flew to the United States to continue in medical treatment at the University of Utah Medical Center on April 16.

The Norby family requests friends hold off visiting for the time being as Richard and Pam find a new normal and continue the recovery process.

BYU-Utah basketball games will resume play in 2017 Next post