10 tips for talking to grieving kids 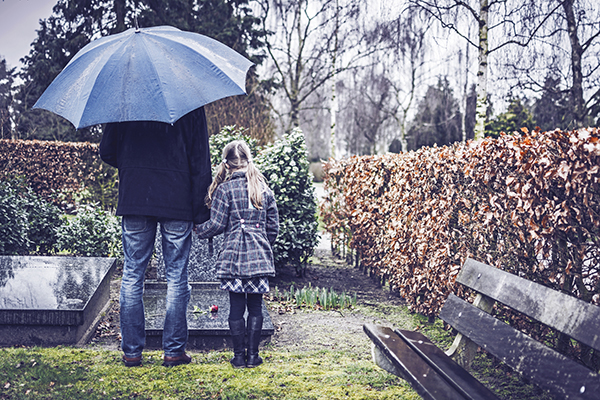 Death is a tricky topic of discussion among adults, but talking to grieving kids about the death of a loved one can be downright intimidating. But experts say the difficulty of the conversation doesn’t make it any less important.

One in 20 children will experience the death of a parent before they graduate from high school and one in four will lose a significant family member, according to the National Alliance for Grieving Children. Children may not express their grief over the death of a loved one in conventional ways, but that doesn’t mean they won’t want or need to talk about their loss. According to the American Academy of Child and Adolescent Psychiatry, children that do not have access to grief support programs and services are much more at-risk to develop emotional, psychological and even physical health issues.

If you’re at a loss about how to talk to a child or teen about their loss, try one of these 10 tips:

1. Don’t assume a child is fine because he is playing

Young children aren’t very verbal and their thoughts come out in actions and behaviors, says Barbara Norris, executive director of A Center for Grieving Children in Ogden. “Adults go from deep sadness to numbness and kids go from deep sadness to play,” she says. “A lot of times an adult may think, ‘Oh look, they’re playing, they’re doing fine.’” In reality, they likely don’t understand the permanency of death, and the sadness will come and go. “We have this perception that it’s not affecting (kids) as much as it really is.”

2. Be prepared for trigger times

Certain times of day may be more emotional for a child. For instance, if a little girl’s dad read her a story every night, bedtime may be a sad time for many months. Reinventing the nightly tradition may help a grieving child. For instance, consider the actions of one young mom who used night time to tell stories about daddy and write them down for the future. “Kids are sometimes afraid they are going to forget,” Norris says.

Every child in a family will grieve differently, says Jill Macfarlane, development director at The Sharing Place in Salt Lake City, and may require a different outlet to express grief. “Grief is definitely not black and white,” she says. “With younger kids, they tend to express their emotion in physical ways, especially grief emotions.” Playing a sport, doing art or playing and listening to music can help children grieve. “Find something that speaks to their emotions without them having to talk about it,” she says. Teenagers may prefer to talk but it will likely be on their timeline — let them know your door is open for them to come to you anytime and leave it at that.

4. Expect kids to re-grieve as they grow

Don’t be surprised if a child out-of-the-blue grieves a loss from years prior. As a child goes through their developmental stages they will likely grieve the death in a different way, Macfarlane says, because their emotions and cognitive abilities deepen and become more complex. “You can absolutely re-grieve that death in a different way,” she said. For instance, a boy whose father died when he as an infant may grieve 10 years later as he begins to comprehend that death in his life. The same child may grieve again at his wedding and the moment with his father that will never be.

Keep communication as simple as sharing a memory with a child. This is especially true when a parent or sibling dies under tragic circumstances, such a suicide, and neighbors or others outside a close circle of friends aren’t sure of the right words.  “Say, ‘I’m so and so and I knew your dad’ or ‘I grew up with your dad,’” Macfarlane suggests. “Sharing simple memories helps make sure that the kids are still included and still normal.” Teenagers find photos and stories of their parent as a youth especially meaningful, Macfarlane says.

6. Use their loved one’s first name when you talk

The first thing Macfarlane does when she talks with someone who has lost a child is ask their name. “Someone will say to me, ‘I had a son who died,’ and I’ll say, ‘Oh, what was your son’s name?’” Macfarlane says. “Using their name is really powerful for somebody who has lost someone.”

7. Remember their birthday and other special days

The No.1 thing Macfarlane hears from families after the death of a loved one is that it is so important their person is not forgotten. Reach out to families on the birthday of their lost spouse or child or call on an anniversary. Send a letter with memories of that person or a birthday card to make the occasion. “Call and say, ‘I thought of Suzy on her birthday last week,’” Macfarlane suggests. “I think there is a common misconception that if you bring up the death it’s going to make them cry or upset them. It may make them cry and but it’s a thank-you-so-much-for-remembering cry.”

8. Encourage them to join a support group

Joining a support group like those at The Sharing Place and A Center for Grieving Children is great way to help kids grieving after a death. “It really normalizes the situation for them and helps them realize they aren’t alone,” Macfarlane says. “A support group is really helpful for anyone whether you’re coping really well or you’re not coping at all.” Seek professional counseling if grieving symptoms, such as anger, sadness or appetite changes, disrupt everyday life.

There is nothing anyone can say that will take away a child or adult’s grief, so it’s best to stick with a simple sentiment. Don’t overthink it, Macfarlane says, but share a memory, picture or a simple “Thinking of you” goes a long way.

Kids and adults do really well the first three months after a death and then they often drop off and feel alone in their grief, Macfarlane says. Although grief gets easier to cope with it never goes away. “Even if it’s been 10 years it’s still worth bringing up that you’re still thinking of that person,” she says.