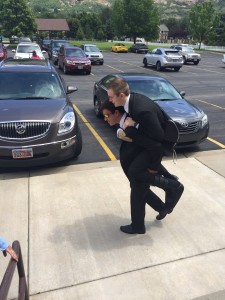 Elder Mason Wells was carried down the stairs and sidewalk following his mission homecoming on Sunday by former companion Matthew Jouffray. “This is just like old times,” Wells joked.

Elder Mason Wells reported his mission in the Pinecrest Ward on Sunday to a packed chapel of friends from both the Sandy area and the Lone Peak community (where he graduated from high school in 2014). He stood to give his address with his left foot in a boot supported by a medical scooter and his right hand in a glove protecting his burns. He will return to the University of Utah Hospital this week for more surgeries on his left ankle.

He started off his 26-minute talk by quoting a friend who said that he had ended his mission “with a bang.” Much of his extemporaneously delivered message was focused on the lessons he learned about faith and conversion.

“A mission is a chance for refinement, and God had a lot of refinement to do with me and He did it,” Mason said.
Mason explained that on the evening of March 21, the Spanish elders he and Elder Empey roomed with in their Brussels apartment were listening to the Face To Face Event with Elder Jeffrey R. Holland. Mason only remembered hearing one sentence from the broadcast — “Heavenly Father will keep every promise made to you.” That line played in Mason’s head the rest of the night.

“And the next day I found out why,” he said. “In the morning after the bombs went off, I ran out to the sidewalk and I was nervous because I had a lot of injuries. I thought I was going to lose my leg because my shoe had been blown off and there was lots of blood on me. I didn’t want to lose my leg, but I told God that if that’s what he wanted, I would be OK with it.”

Then Elder Holland’s one-sentence sermon kept coming back to Mason’s mind. He knew God would keep every promise made to him, including those in his patriarchal blessing.

“I received a confirmation that day on the sidewalk that He would keep every promise if I’m obedient and faithful,” he said.

Mason also said he was filled with God’s love for all the people in the Brussels airport. 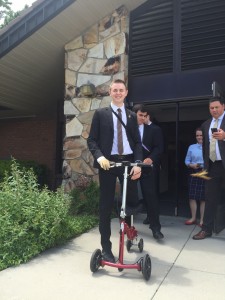 On Sunday, Elder Mason Wells reported on his mission that got cut short by the Brussels Airport bombing. Wells returns to the hospital this week for more surgeries.

“Because of that I didn’t feel pain or anger, and ultimately I wasn’t truly scared because I knew how God felt for those people that day,” he said.

Mason quoted Ether 12:27 and then taught that weakness is not a negative thing because weakness turns us to the Lord; however, we get to choose how to react to our challenges.

Mason then referred to his Lone Peak high school football coach who used to say, “I’m more impressed with what people do than with what they say.”

Ultimately, we choose what we do and which actions we take, Mason said and then joked, “My parents are probably wondering what I know about action and preparation after being on the couch for two months!”

Mason spoke about how his understanding of faith increased as he made the effort to see God’s hand in his life. “It’s a pity how often we don’t take chances to increase our faith and how many manifestations we miss because we aren’t prepared,” he said. “It’s easy to blame things on God and to say things weren’t meant to happen. But I know that faith is the result of the decision to believe.”

He also quoted one of his favorite lines from Preach My Gospel, which states that humility is the willingness to submit to the will of the Lord. “I learned very quickly that when we are humble it opens up the floodgates for the blessings of the gospel,” Mason said.

Mason ended his talk by pleading with the audience to not do anything that would betray the Savior’s love for us. He also said he can’t wait for the day he’ll be able to see the Savior again and thank him “for every single good thing that has happened in my life. I owe everything to Him.”