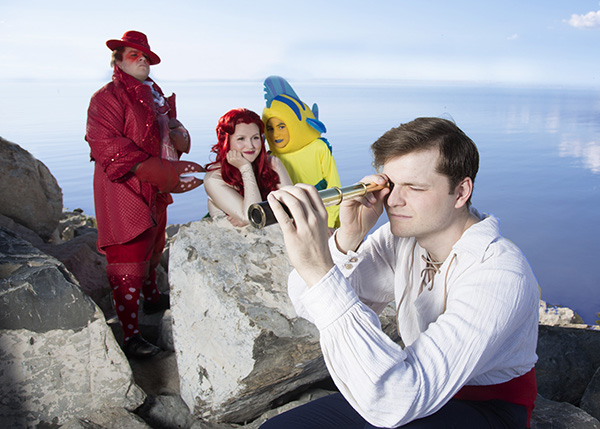 The Little Mermaid is becoming “part of (our) world” on the big stage to open the SCERA’s outdoor season.

This under the stars theater takes the audience under the sea as well as on a stroll up on the land as they get to know another side of the iconic Disney princess, Ariel. And this time the audience will get to know Ariel like they’ve never known her before.

“They take these characters that were originally a cartoon for children and the show gives them a realness that is really appreciated,” said Hannah Bayles, who plays Ariel in the show. “You get to know Ariel a little bit more. There’s a little more explanation into her character. You see Ariel with Prince Eric more. There is more face time with them so that by half way through the show you are rooting for them.”

While Ariel is a fish out of water as she trades her voice for a chance to walk on land and meet Prince Eric, Bayles is no fish out of water when it comes to theater. However, this is her first time performing on a stage at this magnitude.

“Being on the stage looking out is so cool,” Bayles said. “Everything has to be larger than life on a stage like that because it is so big.”

However, her newness to the SCERA’s 70-foot outdoor stage is nothing a spunky, confident Ariel couldn’t handle. And director Shawn Mortensen says Bayles emulates Ariel.

“She’s exactly what you would think Ariel should be,” Mortensen said.

… “With the iconic-ness of Disney, it is very intimidating to play those characters. She steps up to the challenge. She’s just fun. You watch her and you want to go down there and hang out with her.”

Mortensen understands that with the Disney stamp everyone knows the musical, so they’ve put the surprises in the details, giving it the magical Disney touch.

“It’s just one of the shows: you know the storyline, you know what happens, there is nothing really to reveal except how you are going to reveal the elements,” Mortensen said. “I think that is what adults enjoy.” 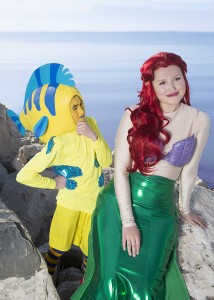 Samuel Murdock is Flounder and Hannah Bayles is Ariel in the SCERA’s production of “The Little Mermaid. “I would describe Ariel as unapologetically herself,” Bayles said. “She is 100 percent authentic. She’s passionate. She loves to have fun. She’s spontaneous. She’s spicy. She’s also kind and loyal. I think that Ariel has qualities in her that I have wanted to incorporate in my life.” (Photo by Mark A. Philbrick)

Mortensen said he’s included incredible detail in Ariel’s grotto, including glitter. There is LED lighting in some of the costumes. And the two 8-feet puppets that are Ursula’s faithful eel companions — Flotsam and Jetsam — are large enough that they take two people per puppet to manage. But the shining moment is the moment Ursula, the evil sea witch, sets her tentacles on stage.

“Keep your eyes open,” Bayles said. “There are so many little things that you can see. In ‘Under the Sea,’ there are so many sea creatures. I don’t even think I know them all.”

Plus, the stage production has a few new numbers not included in the Disney film which both Bayles and Mortensen said were their favorite performances. Bayles said she loves “Beyond My Wildest Dreams,” a song Ariel sings after getting her legs. Mortensen — though he said it was like being asked to choose his favorite child — said “Positoovity” was one of his favorite numbers. Scuttle and his fellow gulls sing this song after he realizes Ariel has legs. Ariel’s mersisters and Flounder even get a song, “She’s In Love.”

“I think all of these new songs blend seamlessly with all of the songs from the movie,” Bayles said. “The continuity feels like it’s one, like they were always there.”

But don’t worry — the classics such as “Under the Sea” and “Kiss the Girl” are still part of the show.

“I want to make sure that when you bring your kids to the show that their faces light up like they’ve been at Disneyland,” Mortensen said.

Despite being the director and the stage designer, Mortenson says watching rehearsals are still magical for him.

“There are moments I feel like I am sitting on the corner at Disneyland eating a corndog and watching the parade,” Mortenson said.

While the show is fun and adults will find themselves resorting back to their 6-year-old selves, Mortenson says the show does come with a warning: “You will be singing ‘Under the Sea’ for the rest of the month.”

Other leads in the 40-man cast include Samuel Murdock as Flounder, Kyle Baugh as Sebastian, Cameron Smith as Prince Eric, Allison Books as Ursula, Eric Smith as Scuttle and Bryan Johnson as King Triton.

“The Little Mermaid” runs at the SCERA Shell Outdoor Theatre in Orem from June 3–18 at 8 p.m. Shows are on Mondays, Tuesday, Thursdays, Fridays and Saturdays. The show will be performed in American Sign Language on Thursday, June 16. General admission tickets cost $12 for adults and $10 for children ages 3–11 and seniors 65 and older. Reserved areas with a free chair range from $14 to $16 for adult $12 to $14 for children and seniors.