The BYU Museum of Art has a new exhibit, “Capturing the Canyons: Artists in the National Parks,” to celebrate 100 years of national parks. (Photo courtesy BYU MOA)

A large gallery on the lower floor of the BYU Museum of Art has recently transformed the Americana and nostalgic “American Chronicles: The Art of Norman Rockwell” exhibition into an experience similar to walking along a canyon floor, looking at the canyon walls in awe.

“Capturing the Canyons: Artists in the National Parks” is the newest exhibition at the BYU Museum of Art, featuring artwork created in and about eight nearby national parks: Arches, Bryce Canyon, Canyonlands, Capitol Reef, and Zion in Utah, plus Yellowstone, Yosemite and the Grand Canyon in surrounding states. This new exhibition serves not only to educate visitors about these amazing Western national parks, and not only to celebrate the 100 year anniversary of the National Park Service, but to inspire visitors as these artworks and places of natural wonder have inspired people for centuries.

The head curator of “Capturing the Canyons,” Ashlee Whitaker, said, “National parks and artists have always had a special relationship. As more parks were created throughout Utah, artists immersed themselves in those innumerable vistas, too. Ansel Adams is as much part of Yosemite as Half Done, Thomas Moran as Yellowstone’s Old Faithful, and Maynard Dixon as Zion’s Great White Throne.”

The exhibition begins with the first expeditions to these territories by explorers and surveyors, who also acted as amateur artists to document their journeys through this new, uncharted territory and fantastical landscapes. In later expeditions, artists including Thomas Moran went along on these journeys, providing sketches and paintings in their sketchbooks. “Capturing the Canyons” features some of these travelogues and sketchbooks, showing some of the first artistic documentation of these landscapes that would later become national parks.

As the exhibition progresses, artists start to include details of tourists and visitors to the parks as they became more accessible to visitors who had heard about and seen the artwork of these stunning landscapes. Finally, towards the end of the exhibition, contemporary artists examine the issues of conservation, extinction and still of absolutely awe in these national parks. 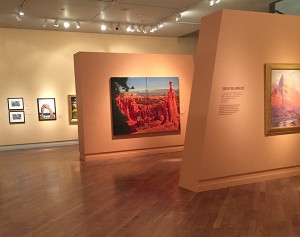 The BYU MOA encourages patrons to take selfies with the paintings and photos. Then post your photos on social media using the hashtags #FindYourPark #BYUMOA.

Museum educator Lynda Palma explains the artwork in the exhibition: “Several media are represented, including paintings, prints, photographs and book illustrations. Each work reveals a different interpretation of the landscape based on the unique perspective of the beholder. The surveyor is concerned with chronicling elevations and distinctive physical features; the geologist reads the earth’s history in its rock formations; the environmentalist photographs the changes wrought by both man and nature; and the artist attempts to render God’s art with the sublime majesty of its original creation.”

The exhibition not only showcases the wonder of the parks, but also shows what influence artists had on lawmakers to protect and preserve these areas. Sketches and photographs of the Yellowstone area so shocked and amazed people that much of the preservation and establishment of Yellowstone as the first national park were related to those first sketches and photographs.

Some of the artworks in the exhibition are actually responsible for the creation of certain national parks. For example, artists Lynn Fausett painted “Angel’s Arch, San Juan County,” which was then exhibited at the Supreme Court Chambers in Washington, D.C. in 1962, as Congress debated a proposed National Canyonlands Park bill. This painting conveyed the distinctive landscape of the area to Congress. The proposed bill eventually passed in 1964, with Fausett’s painting having a direct influence on its passing.

Still today, these parks have a deep impact — both on society as a whole and on an individual level. Throughout the exhibition, visitors are encouraged to find the various selfie spots — hiking boots on the floor in front of key pieces — and take a selfie in front of whichever of those pieces most resonated with them. The National Park Service, as part of a large campaign surrounding their centennial anniversary year, has popularized the #FindYourPark campaign on social media.

The BYU Museum of Art similarly encourages visitors to find their park in the “Capturing the Canyons” exhibition — find the pieces that resonate the most, that recall memories, that elicit emotional response, that simply inspire awe. The MOA encourages visitors to take a selfie in front of any of the designated pieces and then post to social media with the hashtags #FindYourPark and #BYUMOA.

“Capturing the Canyons: Artists in the National Parks” is open at the Brigham Young University Museum of Art through Aug. 20, 2016. The exhibition is free and open to all ages.