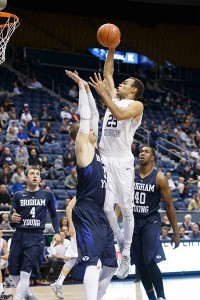 BYU basketball’s Jordan Chatman (25) will transfer from the program for the 2016–17 season. (Photo by Jaren Wilkey/BYU Photo)

BYU football will have the fourth toughest college game schedule according to a “Friday Five” ranking by CBSsports.com.

Noting that BYU’s position as an independent program opens up its schedule for highly worthy opponents, CBSsports.com acknowledged how difficult it will be for the Cougars to go 12–0 this season.

“The Cougars will play 10 of their 12 games against teams that went to a bowl last season,” wrote CBS Sports. “One of the two teams to not make a bowl game is Southern Utah, which doesn’t have a bowl to play in, but did win the Big Sky Conference. The Cougars start the season with Arizona, Utah, UCLA and West Virginia. Then, after playing a good MAC team in Toledo, they’ll hit the road to play Michigan State, come back home for Mississippi State, then head back on the road to play Boise State and Cincinnati.”

See the top 5 teams with the toughest schedule here.

The announcement came the same day that Chatman was accepted into the BYU J. Reuben Clark Law School.

“The BYU Law School accepted him but wouldn’t let him go to law school and play basketball at the same time,” Jeff Chatman, Jordan’s father, wrote on Facebook.

Jeff also clarified that Jordan wouldn’t be attending the BYU Law School in 2016.

In just two years at BYU, Jordan graduated in April with a degree in Asian Studies with an emphasis in China.

“Jordan is a great student-athlete,” said BYU coach Dave Rose. “We’re proud of what he achieved on and off the court. We wish him and his family the very best.”

The 6-5 guard from Vancouver, Washington has three more years of eligibility. He helped the Cougars to a 26-11 record during his redshirt freshman season, including a run in the NIT tournament to the semifinals at Madison Square Garden in New York.

“I would like to thank Coach Rose for the opportunity to play at BYU,” Jordan said. “I wish the best for him, his staff and my former teammates in the future.”