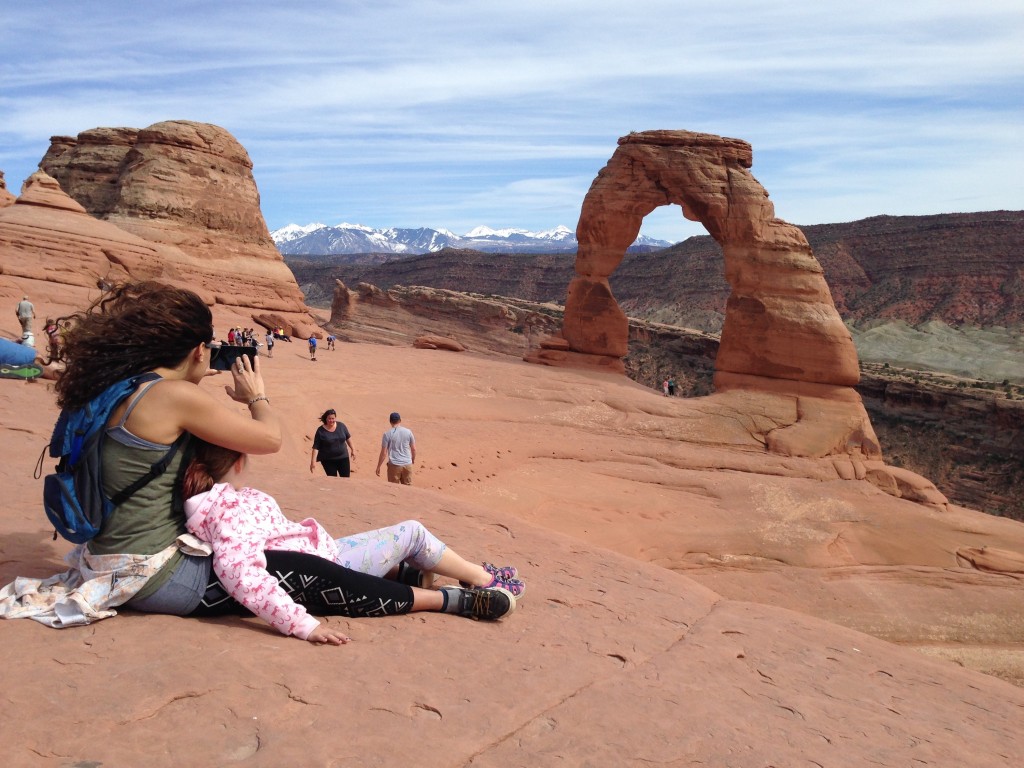 Hikers take in the view of Delicate Arch, one of Utah’s most famous landmarks, while visiting Arches National Park. (Photo by Camden Ball)

Utah is home to five national parks — more than any state except California and Alaska — with outdoor wonderlands showcasing hoodoos, hanging gardens and other geological marvels. If you’ve never ventured down south to check out the gorgeous gorges, canyons and red rock that mark Utah’s parks, now is the time to plan a trip.

How do you get the most out of these world-famous destinations a mere 3- to 4-hour drive from Utah Valley? Read on for travel tips and fun facts about Utah’s national parks — and watch throughout the year for in-depth looks at a few national parks nearby.

National parks are a uniquely American idea — or, as writer Wallace Stegner said, “the best idea we ever had. Absolutely American, absolutely democratic, they reflect us at our best rather than our worst.” The first-ever national park in the world was born in 1872, when the government set aside Yellowstone National Park as “a public park or pleasuring-ground for the benefit and enjoyment of the people,” according to “A Brief History of the National Park Service.” 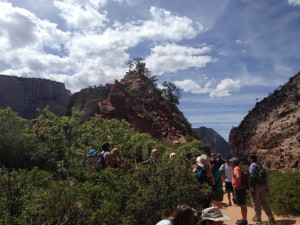 Hikers descend the chains after completing the last stretch of the Angels Landing hike in Zion National Park. (Photo by Christa Woodall)

The preservation movement gained momentum, and in 1906, the Antiquities Act gave the president authority “to declare by public proclamation historic landmarks, historic and prehistoric structures, and other objects of scientific interest that are situated upon the lands owned or controlled by the Government of the United States to be national monuments.”

More monuments caused a need for better management, and in 1916, Utah’s Senator Reed Smoot sponsored the bill that President Woodrow Wilson signed to bring the National Park Service into existence.

Since then, the National Park system has grown to include 411 designated national parks, monuments, recreation areas, historic sites and more. Last year, a record-breaking 307 million people visited these sites, according to the National Park Service.

Within a half-day drive of Utah Valley, you can escape into the breathtaking beauty of Utah’s national parks. Zion National Park is among the most visited parks in the nation, welcoming 3.6 million visitors in 2015, while others like Capitol Reef National Park are little-known wonders. A weekend trip is enough to experience the highlights and unique flavors of each park, but spending a few days is recommended if you want to dive deep into hikes, history and geology.

Utah’s national parks offer adventures for outdoor enthusiasts of all levels and ages. If mobility is an issue, Bryce Canyon National Park is a great option — much of its sweeping vistas and amazing scenery can be taken in by driving along the 18-mile scenic drive along the Paunsaugunt Plateau. Nine viewpoints scattered along the way showcase the park’s colorful rock pillars, fins and spires along with forests of Douglas firs and blue spruces. 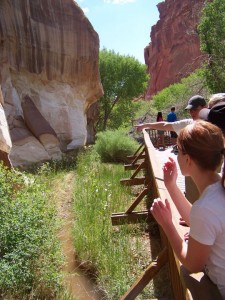 Visitors get an up-close view of petroglyphs carved by the ancient Fremont people along the 0.3-mile Petroglyph Pullout in Capitol Reef National Park. (Photo by Christa Woodall)

Capitol Reef National Park also offers a scenic drive that showcases Utah’s historical heritage. The drive through the Fruita Historic District includes a stop at the Gifford Farmhouse, a drive past a uranium mine, the Grand Wash through which outlaw Butch Cassidy allegedly traveled to Robber’s Roost, ancient petroglyphs left by the area’s settlers 1,000 years ago, and the Pioneer Register in which early pioneers etched their names in stone.

Although Arches National Park is paradise for hardcore hikers with adventures like the Fiery Furnace — a labyrinth of fins, arches, bridges, and slots that requires a permit to explore — many of the park’s namesake sandstone arches can be seen with easy walks along well-groomed pathways from parking lots along the 18-mile highway. Delicate Arch, arguably the state’s most iconic natural landmark, requires a steep 1.5-mile hike, but the trek is well worth the effort.

To truly explore Canyonlands National Park, which writer Edward Abbey called “most arid, most hostile, most lonesome, most grim, bleak, barren, desolate and savage quarter of the state of Utah — the best part by far,” hiking is a must, although its Island in the Sky district offers easy car access to stunning views of red-rock canyons carved by the Green and Colorado rivers.

Zion National Park offers a unique feature: shuttles. Visitors can explore via nine stops along the park’s shuttle system, with drivers pointing out features along the way. The best views come by walking around at each stop and hiking along the park’s plentiful trails. Advanced hikers will want to tackle the famed Angels Landing — so named because it was once said the point was so high, only angels could reach it — while the mile-long Riverside Walk offers a flat, easy paved trail that’s wheelchair accessible.

If blazing heat isn’t your cup of tea, Bryce Canyon is your best bet for a summer destination. While temperatures reach triple digits in most other Utah parks during summer, Bryce Canyon stays a cool 80 degrees in the daytime and cools off at night. Spring and fall are the best times to see Zion, Arches and Canyonlands. Capitol Reef is best in spring, when you can enjoy blossoms in the park’s 19 orchards.

Utah’s National Parks By the Numbers 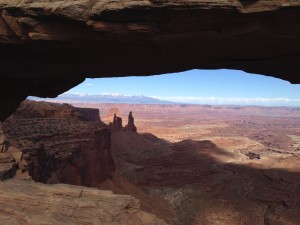 Mesa Arch captures the most well-known view of Canyonlands National Park, showcasing its scenic Island in the Sky district. (Photo by Christa Woodall)

As you plan, visit the National Parks website for information on prices, accommodations, and special events for each park. An $80 America the Beautiful pass provides one year of access to any land within the National Park System, including nearby Timpanogos Cave — the pass can be purchased at any federal recreation site, including the entrance to American Fork Canyon. Discounted passes are also available for active military, seniors and people with disabilities.

If you have a fourth-grader at home, be sure to visit Every Kid in a Park to obtain a free national parks pass that’s valid from the September they start fourth grade through the August afterward.

Utah’s five national parks aren’t the only ones within a day’s drive. Hop in the car, and you can get to: