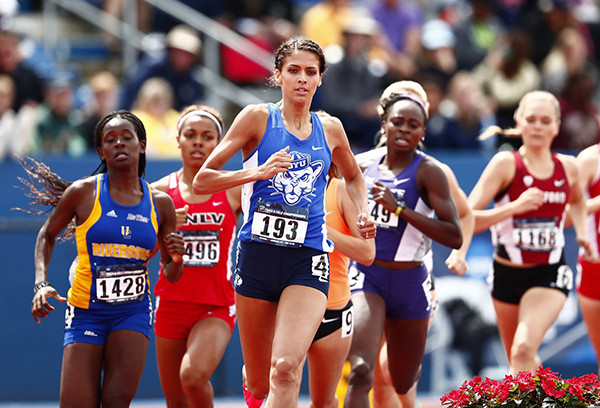 Shea Collinsworth took third overall in the 800m race at the NCAA Division I Track and Field Championships. (Photo by BYU Photo)

BYU’s Shea Collinsworth and Shaquille Walker both took third place in their respective races at the NCAA Division I Track and Field Championships. Both athletes competed in the 800m race.

Collinsworth set a personal record in the female 800m race with a time of 2:02.83 on Saturday. That time earned her NCAA first-team All-America honors and qualified her to compete in the 2016 U.S. Olympic trials along with Walker.

“Today it was all about Shea Collinsworth,” said track and field head coach Ed Eyestone in a press release. “She put herself in a great position this weekend, and she knew what she had to do. She showed no fear and went out strong, starting right out with the leaders. She battled all the way to the finish line, and I was very proud of her effort. She is a very strong young lady, and she represented herself and the university very well.”

“It was a historic race in a lot of ways. Shaq ran a really great race and put himself in a excellent position,” said Ed Eyestone, BYU track and field head coach, in a press release. “It was obvious from the start that it was going to be fast because they came through the first 200 meters in 24 seconds and through the first 400 meters in 40 seconds which is really fast. He acquitted himself very well and that’s all you can ask for. This was definitely the biggest race of the meet in terms of NCAA college records and Shaq held himself up there with top competitors.”

Both Collinsworth and Walker will return to Eugene, Oregon during the first week of July to compete for a spot on the U.S. Olympic Team this summer.

BYU baseball had two current players drafted in the Major League Baseball Draft Saturday night as well as a pair of freshman signees. All-West Coast Conference first-teamers Brennon Lund and Michael Rucker were both signed in the 11th round of the MLB pro draft.

Lund, a centerfielder, was the 336th pick in the 11th round by the Los Angeles Angels. Rucker, a pitcher, was the 344th  same by the Chicago Cubs.

“I think I speak for the entire BYU baseball family when I say how happy I am for Brennon and Mike for reaching the next level of their respective baseball careers,” said BYU coach Mike Littlewood in a press release. “Early June is always exciting for quality baseball programs as they have potential MLB draftees. I have always viewed having players drafted from our program as a positive. It creates excitement and shows potential recruits that they will go to a program that will develop them and get them ready for the next level.”

November signees Payton Henry and DC Clawson, both catchers, were also selected in the pro draft. Henry was picked by Milwaukee Brewers in the sixth round. Clawson was picked in the 34th round by the New York Yankees.

“I’m also happy for two of our incoming freshmen Payton Henry and DC Clawson as they were drafted last weekend,”  Littlewood said in a press release. “They have great choices in front of them but obviously we hope they show up on campus in the fall and become part of the Cougar family.”

Utah Valley University’s Danny Beddes was drafted by the Pittsburgh Pirates in the 15th round of the 2016 Major League Baseball draft on Saturday night.

The 465th overall selection was named first-team All-WAC in his final season as a Wolverine. He set new school records for career wins, career strikeouts, and strikeouts in a season. Finishing 9–4 with a 4.56 ERA and 99 strikeouts, Beddes led UVU to its first ever NCAA Tournament appearance.

“I’m really happy for Danny,” said UVU head coach Eric Madsen. “He’s worked very hard to get to this point and was instrumental in helping us achieve our goal of getting to a Regional this year.”

Beddes is the highest pick of five picks from UVU since the program’s move to NCAA Division I in 2004. The last Wolverine selected in the MLB Draft was Goose Kallunki in 2012 to the San Diego Padres.

Utah County uniting in vigil for Orlando victims Next post