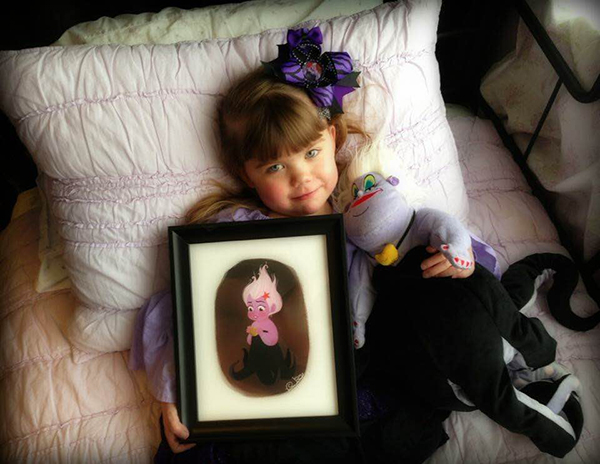 Six-year-old Lily Poole has five rare congenital heart defects, but has found support in the Disney villain Ursula. When Lily wasn’t going to be able to meet Ursula at Disney World, the SCERA’s cast of “The Little Mermaid” stepped in to fly Lily in from her home in Philadelphia, Pennsylvania for their show on Thursday. (Photo courtesy Angela Poole’s Facebook)

It turns out Ursula really does have a nice side — at least, Allison Books, who plays Ursula at the SCERA Shell Outdoor Theatre, makes Ursula a hero for once.

When Books received a message from a friend about 6-year-old Lily Poole’s shattered dreams of meeting Ursula at Disney World, Books reached out to Lily’s mom and made a special video for the young girl following a performance of the SCERA’s “The Little Mermaid.”

“Lily, darling, it’s me Ursula,” Books as Ursula said in the video. “I want you to know how very brave you are. We’re so very alike you and I, gals with ambition. I want you to know how brave I think you are and you’re such a fighter, just like me, darling. You keep on fighting and know that your dear friend Ursula is rooting for you every step of the way.”

According to Lily’s mom, Angela Poole, Lily loved the video.

“How incredible!!! Lily received this amazing video from a gorgeous and talented Ursula performing in Utah,” Angela wrote on Facebook. “Lily stole my phone, hid under her bed and watched it end on end about a million times. Haha. I barely got it away from her so she could send her own video response.”

Lily even responded to Books with two of her own videos.

Lily has five rare congenital heart defects that makes her purple, which was why Lily fell in love with the sea witch. Her mom, Angela Poole, told KCCI Des Moines Ursula made it feel so Lily no longer felt alone when she saw the purple sea witch for the first time.

The Make-A-Wish Foundation granted Lily’s wish to go to Disney World and see Ursula in the Disney villain parade, but Lily wouldn’t be able to meet Ursula in person because the park doesn’t have an Ursula character for kids to meet.

The family reached out to acting organizations in Florida, but haven’t had success in finding an Ursula to meet the young girl. The family even reached out to Rebel Wilson, the “Pitch Perfect” actress who recently played Ursula for “Disney The Little Mermaid in Concert Live to Film” at the Hollywood Bowl in L.A. However, nothing worked.

Luckily, the video — which garnered more than 3,500 shares on Facebook — has caused a lot of people from across the country to reach out to the Pooles.

“I’ve been completely overwhelmed and touched by all the thoughtful kindness of complete strangers. Everyone from famous and amateur cosplayers, to models, to actors from musicals, cast members at Disney, make-up artists, special effect artists, past and present Make-A-Wish coordinators, owners of character companies, and costume companies, theater troops and artists and even Drag Queens. I don’t think there’s a group of people I haven’t heard from! My heart is completely full right now!

[pullquote]”This is just what we as performers dream about to have the opportunity to do something like this. This is what theater is all about. It is to take people out of their lives even for an instant.” —Allison Books, Ursula at the SCERA[/pullquote]

… “As far as what we plan to do next, we have been presented with several amazing options for our baby to meet her favorite sea witch, and I will for sure keep everyone updated as we set some concrete plans! Thanks again SO SO much! You have no idea what this means to us, and will mean to her!”

The SCERA’s cast of “The Little Mermaid” was one of the groups. At first, Books worked with “The Little Mermaid” director Shawn Mortensen on the idea of flying herself along with a costume designer out to Philadelphia, Pennsylvania so that Lily could meet Ursula. But then they realized they had one more week of the show and they could do more for Lily at home in Utah County. Working together with the SCERA staff, the cast raised money to fly Lily and her mom out from Philadelphia, Pennsylvania to see the Thursday, June 16 showing of “The Little Mermaid.”

“This is just what we as performers dream about to have the opportunity to do something like this,” Books said. “This is what theater is all about. It is to take people out of their lives even for an instant. If we can bring them into our world on the stage and draw them into the characters and story lines, that is why we do this.”

And local businesses are helping make the trip completely free for the Pooles with restaurants donating meals, local activities and the Provo Marriott donating two nights at the hotel for the family. Plus, Books and the cast are planning a special meet and greet so that Lily can finally meet Ursula in person.

If you would like to donate to help pay for Lily’s flight and her brief stay in Utah County, drop off donations at the SCERA, 745 South State Street in Orem. The donation should be written to the SCERA and have specifications that the donation should be put toward Lily’s trip. You can also call (801) 225–ARTS at extension 1011 to make a donation over the phone.. The office is open from 10 a.m. to 6 p.m. Monday through Friday and from noon until 6 p.m. on Saturdays.

“Obviously, we can do more for her the more funds we have,” Books said.