What the apostles’ children have said about their dads 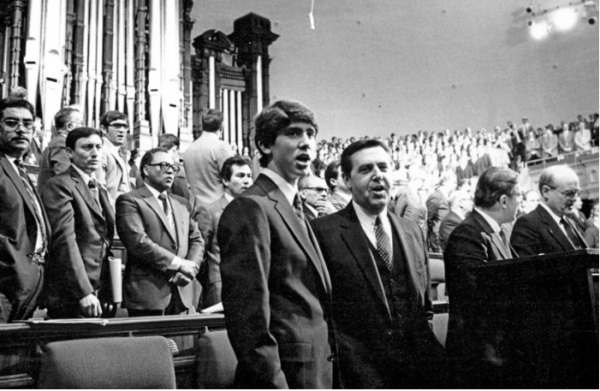 Elder Jeffrey R. Holland and his son Matt sing during a meeting in the Salt Lake Tabernacle. (Photo courtesy LDS.org.)

Fathers hold a valuable place in homes around the world. Especially in The Church of Jesus Christ of Latter-day Saints, the role of father is held in high, sacred regard.

In last April’s general conference, Elder D. Todd Christofferson of the Quorum of the Twelve Apostles called the role of husband and father “the highest of masculine roles.”

“(He) always made time for his children, and he continues to do so today. I never felt deprived of time with Dad. When he was home, he would play games with us and take us out to get ice cream. In the summer he would have more free time, and we would spend this time together in Provo Canyon at the family cabin. I spent a lot of time as a boy fishing with my father. I can’t think of a better way for a father to spend time with a son.” (Liahona, June 2008)

“Something that we all feel about Dad is that he has the ability to make us feel that we are valuable people. He always makes me want to try harder. My father has told us that there are two things that he prays for every night. The first is, ‘What blessings do I have that I am not aware of?’ and the second is, ‘Whom can I help?’ And Dad says there has never been a day that his prayers haven’t been answered.” (Ensign, Sept. 1995)

“We are blessed to have such wonderful parents. When we were younger, I didn’t realize how busy my father was because he always had time for us. We were never a second priority. When we have a problem, we seek his advice. And our children feel that Opa will know the answer, whatever the question may be. Now that he is in the First Presidency, we feel an even greater responsibility to do our very best.” (Ensign, July 2008)

Of his role as father, President Nelson shared these thoughts:

“I cherish dearly the memory of riding the horse with each one of the young ones as they came along. I’d bury my nose in the hair of that little one and wrap my arms around her or him. I’m sure each of the children thought I was hanging on to give them security while they were riding the horse. But I was clinging to a precious moment that I had alone with each loved one as that turn came. On each occasion I offered a prayer of gratitude to my Father in Heaven for the great privilege of being a father to this one, for I knew each to be such a special spirit.” (Ensign, June 1984)

“He had an impression that when I grew up, if he didn’t stop (constantly asking me to clean up my things), he wouldn’t have a relationship with me and that all I would remember of him is just him kind of nagging at me. I don’t remember one day him nagging me and one day him instead saying he loved me. He didn’t sit me down and announce that, ‘From now on I’m going to focus on being more loving.’ He just decided to more frequently express his love for me and to just ignore my messes. And our relationship truly benefited. In a few years, my mom was gone, and he became a mother and a father to me,” Baker said. “We had a really sweet relationship to fall back on and to build from because he just decided to love and look past my failings. I am so grateful to him for being such a loving father and such an incredibly honorable man.” (Deseret News, June 2015)

“He is truly the patriarch to our family. Family matters are very important to him. Now that most of us have moved away from home, he feels that it’s important for us to get together and still communicate with each other. A couple of years ago he invited the married children and their spouses to stay overnight in Park City. He had a family meeting the next day where we talked about what was going on in our lives and what our goals were. And he taught us. It was a little like what he does in stake conference when he teaches the leadership of the stake. It was a lot of fun, too.” (Ensign, March 1986)

“Patience is one of his best attributes. He is a very patient father. In his business dealings, he is a good negotiator. He has the ability to talk with both sides and keep them focused on the problem and on the end goal.” (Ensign, April 1995)

“Every night was a kind of family home evening filled with laughter, compliments, interesting conversation, testimony, teaching, and expressions of love. You always knew Dad was happiest when he was home with his family.” (Liahona, August 1995)

“He has always gone to the real sources: the words of the prophets and the scriptures. He is bold but he listens. He will ask inspired questions and then listen to your answer, and then he will ask another inspired question. Once he was giving me something similar to a temple recommend interview when I was about 14. He asked me if I sustained President Ezra Taft Benson. I said that I did. And then, after a pause, he asked, ‘What have you read lately of what President Benson has said?'” (LDS.org, Prophets and Apostles)

“I attended the retirement dinners honoring Dad when he left his law firm and later when he stepped down from the leadership of a health-care system. I was in awe that colleague after colleague, none of whom were members of the Church, spoke — often with tears — about what Dad meant to them, how he had mentored and nurtured them, how he had selflessly fostered their careers without any sense that it was taking time or energy away from his own.” (Liahona, April 2008)

“I was inspired by my father’s faithfulness in being a great home teacher, despite having limited time. One of the sisters we visited was a shut-in. Father cared for her tenderly, making sure that she always had the sacrament and that her needs were met.” (LDS.org, Prophets and Apostles)

“Daddy always made time for the children. For example, he took each one individually to breakfast with him once a month. He let us pick the place for breakfast and the topics we would talk about. We looked so forward to having his undivided attention.” (Liahona, August 2009)

“We would fight over who got to sit by him at church because it was such a novel thing to have him there. I remember putting my hand in his hand and thinking to myself, ‘If I could just learn to be like him, I’ll be on the right track and will be becoming more like the Savior.’ He was always my hero.” (Ensign, April 2016)

Speaking of his father, Elder Gary E. Stevenson said that his example as a father and as a bishop has inspired him.

“(He was) the bishop of my youth, and his service deeply impacted me.” According to an article in the “Liahona,” Elder Stevenson accompanied his father on visits to the homes of more than 60 widows in their ward. In this venue, he learned important principles of service and ministering.

Ashley R. Renlund, the only child of Elder Dale G. Renlund, has not yet spoken much about her father since his call to the Twelve less than a year ago. However, Elder Renlund has spoken about the example of his father:

“Thinking about refugees in Europe and thinking about what’s happening now, to then think that my father actually experienced that first hand as a refugee in late 1944 — this may be of some interest from his perspective, from Europe’s perspective, because he experienced that. My father remembered to his dying day, with gratitude, the kind people of Sweden who took him in as a refugee.  It inspired him to do likewise — to be kind to others, and it was a hallmark.” (Mormon Newsroom UK, January 2016)