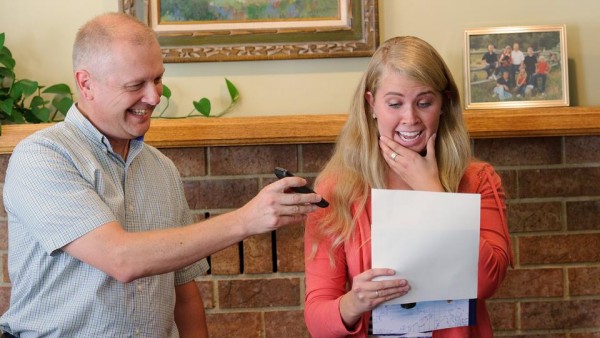 It’s been weeks since your papers were submitted, and the day has finally come — your mission call has arrived! What now?
For many newly called missionaries of The Church of Jesus Christ of Latter-day Saints, opening the mission call is an important milestone that the missionary will share with friends and family. For others, the occasion is more low-key. And for a few, it’s deeply personal.
There was a time in the Church’s history when mission calls were assigned from the pulpit at general conference, sometimes with no prior notice to the recipients. The process of sending mission calls as letters, signed by the prophet, began sometime after the saints settled in the Salt Lake Valley.
Though the process of issuing mission calls has changed little in the last century, the traditions surrounding the opening of mission calls has evolved. Traditions vary from place to place, family to family, and missionary to missionary. Every person should open his or her mission call the way they feel is best for them. In general, missionaries choose one of these three approaches.

For some missionaries, the process of receiving and accepting a mission call is so individual that they prefer to open the call in private. Brooke Thomas, who served a full-time mission in Louisiana, opened her mission call alone before sharing the news with her family.

“I really wanted to open it by myself,” Thomas says. “I just felt like it was a really personal call, and I wanted a moment to pray and feel like it was confirmed — that that was where I was supposed to go. I went into my room and opened it on my own and felt good about it. Then I went and shared it with my parents and roommates.”

Thomas says she’s glad she opened her call that way, but recognizes it may not be for everyone. Even so, she believes every missionary should pray about their call at some point.

“I would say it is up to the person, but I would recommend at some point, even if it’s not right after opening the call, taking that moment to just pray and commune with God to know that that place is really where He wants you. Because that, for me, was really a good experience.”

2. Make it a joyful gathering

A more popular tradition among many Latter-day Saint families is to gather friends and family to share the moment with the missionary, offer congratulations and celebrate good things to come.

Sarah Quinn, who served a full-time mission in France, invited her friends and family to watch her open her mission call. “I was so excited about it and wanted to share it with my family and friends,” Quinn says. “I went to my aunt and uncle’s house with my sister, grandparents and several friends to open it while someone called my dad and any siblings that were available over the phone. There was cheering, treats and lots of happiness. I was so excited about my call and happy to be surrounded by people that were excited with me.”

Maybe big parties aren’t your thing, but you don’t want to be alone when you open your mission call either. Many missionaries choose to open their mission calls with just family members and a few close friends present. This can be easier to coordinate than a bigger get-together and sometimes allows the missionary to open the call a little earlier, without waiting for many people to gather.

Erin Axelson, who served a full-time mission in California, opened her mission call on the road with just the people who were traveling with her. She and her family traveled from their home in South Carolina to Washington, D.C. for Erin to receive her temple endowment — which they scheduled earlier in anticipation of her call arriving in time. While Erin visited friends in Washington, D.C., her call arrived in South Carolina.

“My parents were leaving later that day to meet me in D.C., so I told them to just bring it with them, unopened,” Axelson says. “Torture, right? That night around midnight, they pulled in to the hotel. I opened my mission call in a hotel room near the temple at 12:30 a.m. with just a few family members present. Four hours later, I left for the temple. It was a very memorable day and night!”