As a ‘player’s coach,’ Kalani Sitake puts his stamp on the BYU football program 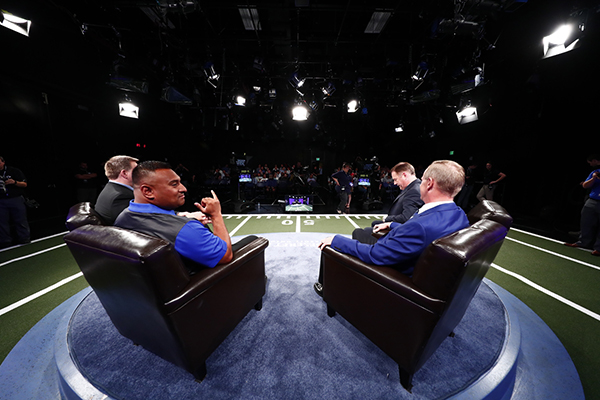 Spring football practices gave Kalani Sitake his first taste of how much life has changed for him as BYU’s head coach. For the first time in his coaching career, his attention wasn’t focused squarely on building up the defensive side of the ball.

Instead of drawing up defensive plays and investing all of his emotions in stopping the offense, Sitake found himself in an unfamiliar position of taking a step back and looking at the whole picture. Suddenly, it mattered to him if the offense completed passes or got first downs as much as the defense getting stops.

“When I was on defense, I didn’t care about what the offense did,” Sitake said. “I just wanted to smash them. I really didn’t care what they were trying to do to a certain degree. I just liked being involved that way. Now if one side does really well, you’re kind of concerned about why the other side isn’t doing well.”

Given the chance to apply that passion and emotion to an entire team, Sitake is already putting a distinctive stamp on the BYU football program two months before his first game against Arizona. He has already created a team of believers among his staff and players in what he brings to the table.

During his first team meeting, Sitake quickly won over the whole room with his philosophy on and off the field. He does everything in his power to build up his players and put them first. The Cougars have embraced that unselfish devotion. Their enthusiasm about him and the upcoming season stood out at BYU football media day on Thursday.

[pullquote]“Kalani is literally the definition of a player’s coach. Everything he does is to benefit us as a team and us as players. He’s exhausting every avenue he can to take care of us. As a player, you see that and you respect that.” —Taysom Hill, BYU senior quarterback[/pullquote]

“Kalani is literally the definition of a player’s coach,” said senior quarterback Taysom Hill. “Everything he does is to benefit us as a team and us as players. He’s exhausting every avenue he can to take care of us. As a player, you see that and you respect that.”

Sitake learned from a stable of capable mentors to prepare him for what lies ahead. Former BYU head coach LaVell Edwards, Utah coach Kyle Whittingham and Oregon State coach Gary Andersen have all served as mentors for him at one point or another during his playing and coaching career. Sitake can draw on lessons he learned while working with Whittingham and Andersen in their debut seasons as head coaches to show him how to build a program.

It helps when faced with tasks ranging from making sure players get proper nutrition to reserving hotel rooms for the team on road games. What also helps Sitake are his own experiences as a BYU player. He knows what his players are thinking, feeling and experiencing because he was once in their shoes within the program.

“I was a player here under LaVell, so I get what the players are going through,” Sitake said. “I lived the same thing that they lived. I went to school here. It’s a unique place to be. There’s no place like it. The fact that we have a lot of guys that are familiar with the school and understand what BYU is all about, it’s natural for us being able to teach these young men about the game.”

The message is getting across to the players. His passion drives them to step up their own commitment to football. They feel like he is invested in their success on the field and in life away from the field.

For Sitake and the Cougars, it could add up to plenty of memorable moments this fall.