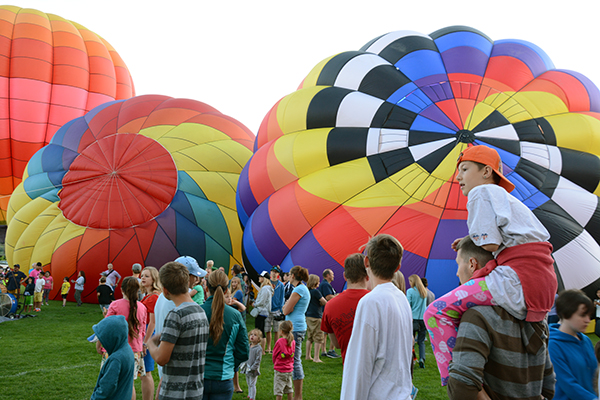 Utah residents began celebrating Freedom Festival months ago with the local elementary schools performing at “Hope For America” and celebrations will continue through the Fourth of July.

“With Freedom Festival, one of our goals is to bring the community together for the July 4th holiday,” says Emory Cook, communications manager for America’s Freedom Festival at Provo. “It’s what we try to do with our events. We have more than 25 patriotic events throughout the year. … It’s just a chance for all of us to come together and celebrate our veterans and freedoms and celebrate the American values that we love.”
Here are a few of the can’t-miss patriotic events that are part of the Freedom Festival:

Up, up and away they go. This early morning tradition is a free event that allows your family to get up close and personal with hot air balloons. Watch the entire hot air balloon process as balloons are dragged from their bags, blown up and then lifted into the air. Balloon Fest is held over three days — July 1, 2 and 4 — beginning at 6 a.m. at Bulldog Field, 1100 N. Freedom Blvd.

Run like the British are coming! Or enjoy a nice jog to start off your Fourth of July. The annual Independence Day race includes a 10K, 5K or the Mayor’s one-mile Fun Run. Lace up for race day at Kiwanis Park, 820 N. 1100 E. in Provo, at 7 a.m. on Monday morning. There is no day-of registration, so register and pick up your packet at Provo Rec Center on Saturday, July 2. Registration costs $20 for the 1-mile run, $30 for the 5K and $35 for the 10K. 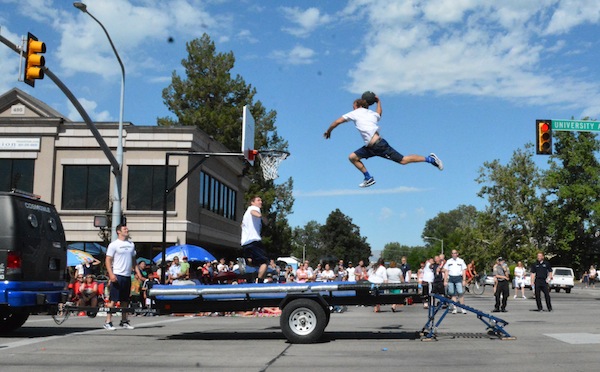 Floats, local bands, police officers and so many more representatives of the community will participate in the Freedom Festival parade. This year’s grand marshalls are the three LDS missionaries from Utah who were injured in the Brussels Airport bombing in March: Richard Norby, (Joseph) Dresden Empey and Mason Wells.

The 2016 parade route has changed slightly. Beginning at 1050 N. University Ave., the parade travels down University Ave. to 200 S. It then turns east on 200 S. and continues to 200 E. where it turns north to Center St. The parade ends at 900 E. and Center St. If you want a good spot for the parade, you are allowed to stake out your spot for the July 4th parade, which begins at 9 a.m., beginning on July 3 at 3 p.m.

Shopping, eating and fun — just what Americans like to do. Enjoy a three-day carnival as well as pop-up vendors on Center St. in Provo on Friday (5 p.m.–11 p.m.), Saturday (10 a.m.–11 p.m.) and Monday (11 a.m.–8 p.m.). Plus, there will be live performers from local musicians including Madilyn Paige, Maddie Wilson, The Five Strings and One Voice Children’s Choir.

Hear the voices of freedom including Col. Gail Halvorsen, “The Candy Bomber.” Halvorsen will speak on Friday, July 1, at 11:30 a.m. at the SCERA Park, 699 S. State St., in Orem. Tour the military outpost and vehicles. If you want to see it all, get a punch card and complete 10 of the 19 activities for a free gift at the Freedom Store. See the whole schedule for “Cries of Freedom” here.

“One, two, three like a bird (Tim McGraw will) sing” for the red, white and blue at the 36th annual Stadium of Fire at LaVell Edwards Stadium. This country star has topped the charts with 36 No. 1 singles including “Live Like You Were Dying” and “Over and Over.” The event is televised on the American Forces Network to more than one million military men and women in more than 100 countries. Local girl band, The Aces, will perform before McGraw. There are still tickets in the $35–$70 range available for purchase. Buy tickets here.

As a 'player's coach,' Kalani Sitake puts his stamp on the BYU football program Previous post