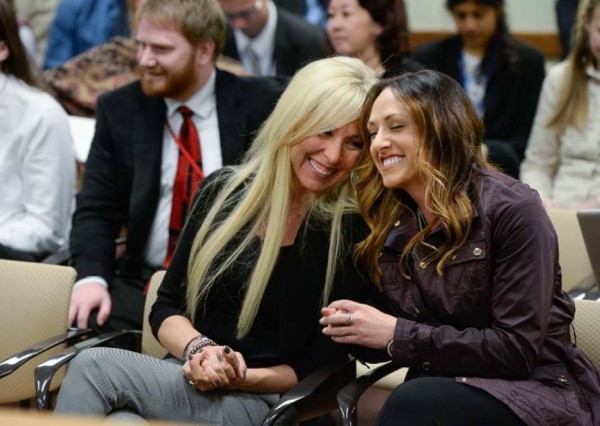 When news of the Dallas sniper attack that left five police officers dead reached Utah County, a few women here knew all too well what the families of the fallen officers were feeling.

Nannette Wride, widow of Sgt. Cory Wride of the Utah County sheriff’s office, has partnered with other widows of police officers killed on duty to offer love and support to those in similar situations.

“We belong to a club that no one wants to belong to, but we’re sure glad we have each other,” Wride says.

Wride and the other widows who make up the Blue Haven Foundation work to assist surviving spouses of law enforcement officers who have died in the line of duty, according to their website. In the coming weeks, the Blue Haven Foundation will assemble five gift baskets — one for each of the police officers’ families — and fly a “widow mentor” to Dallas to deliver the basket, offer support and create friendship. The widows and their families will also be invited to various retreats and other networking gatherings the foundation holds nationwide.

[pullquote]”We belong to a club that no one wants to belong to, but we’re sure glad we have each other.” —Nanette Wride, member of Blue Haven Foundation[/pullquote]

Wride says they won’t be arriving in Dallas for at least a couple weeks.

“We don’t like to go at the very beginning, because that’s when widows feel overloaded and overwhelmed,” Wride says. “We will go after the funeral, when things calm down and they can actually think straight. I don’t even remember my husband’s funeral — I had to watch it on a video. It’s just the way your brain works — you go into that shock, survival mode. We get that, so we don’t want to show up too early.”

“If everyone steps forward and does something, it makes for a lighter load for everyone,” Wride says. “We need help getting there. It’s not cheap to send just one widow, let alone five.”

In the past, baskets have included journals, CDs, blankets, decorative statues, picture frames and inspirational books. All donations can be brought to 1074 South 1560 East in Spanish Fork.

Everyone deserves an angel: Musana provides impoverished women a place to work Next post