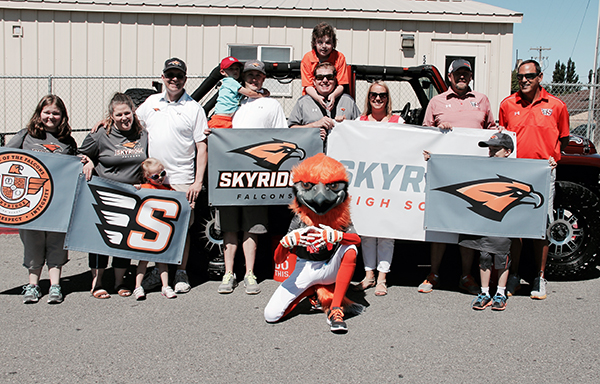 Skyridge High School, which opens in Lehi this fall, revealed its mascot’s name (Flash) at the Lehi Round-Up Parade in June. Administrators and their families walked with Flash in the parade. (Photo courtesy Skyridge High)

The mascot has a name (Flash), teachers are hired, sports teams and cheerleaders are in place and by the end of this week, staff of the new Skyridge High School in Lehi will start moving in.

“Our contractors and our district staff are doing a great job, and we are super excited about the finished product,” Principal Joel Perkins said. “The school really is amazing.”

After the administration moves in, teachers will be able to start moving into their new classrooms, said Karen Ashman, who does community relations for Skyridge. Many of the teachers have transferred from Lehi High School, because the new school is taking about half of that school’s student body. And while waiting for construction crews to finish the school, the Skyridge staff has been working out of a portable building in the Lehi High School parking lot. 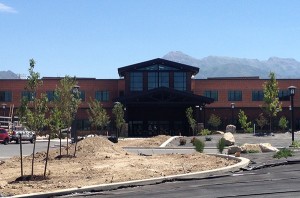 Skyridge High, the new Lehi high school, is nearly complete. Teachers will move into the school at the end of the week. (Photo courtesy Skyridge High)

“The Lehi High administration has been so supportive during this process, and we are so grateful to them for housing us this past year,” Perkins said. “Principal (Dave) Mower and I have worked very hard to keep both schools strong and we feel that the city of Lehi will soon be home to two great high schools. The community has been incredibly patient as we have tried to put all the proper pieces together and we appreciate that support.”

The rest of the school’s staff will be in place before school starts, probably by the first week or two of August, Ashman said.

The school’s football team has been chosen and is practicing on some of the practice fields behind the new school, Ashman said. They won’t be able to play on the stadium field until construction is finished. Their first game — against the new high school in Cache Valley — will be broadcast on KJZZ.

The school’s staff have been using social media to keep people updated on the construction and to get input on choices for the school. It used a survey to get input from the community about school name choices, mascots and colors, then the Alpine school board took a vote on the options.

“We try to keep Instagram current with pictures with construction, to let the public see the progress that’s been going on,” she said. 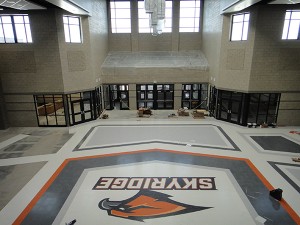 The common area at Skyridge High.

It also used social media and an email to parents to get feedback on a name for the mascot.

Ashman said they got 816 name suggestions, then narrowed that down to the top 15. People then voted on the 15, to narrow it down to five — Ace, Blaze, Falco, Flash and Talon. Then the school had people vote on the final selection, and Flash came out on top.

The school will hold a public open house before school starts, but a date hasn’t been set yet, Ashman said.

“We are excited about the team of folks that we have assembled at Skyridge,” Perkins said. “We are focused on providing each of our students with a high quality and well-rounded experience, and we are looking forward to the upcoming school year.”

Eat more free: Start the week with free Slurpees and Chick-fil-A Next post