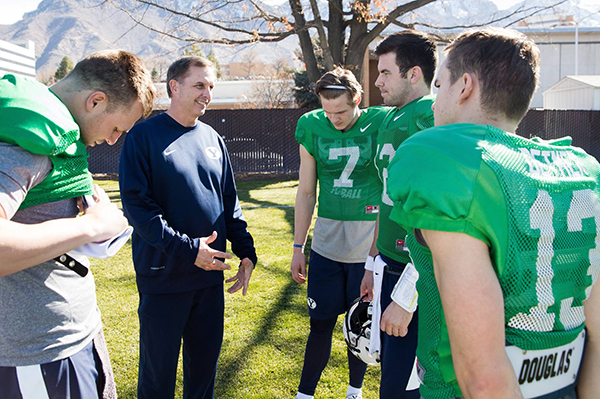 The circle is now complete for Ty Detmer.

When he first left BYU 25 years ago, Detmer departed as one of the most prolific passers in NCAA history. He set a multitude of NCAA records and became the first Heisman Trophy winner at BYU while directing one of the nation’s most explosive offenses over a three year stretch. Detmer followed it up with a 14-year NFL career.

Now he has returned to Provo as the architect of BYU’s new offense.

“It’s been a lot of fun being back, reliving some of the memories,” Detmer said. “It’s hard to believe it was 25 years ago since I left Provo. But it’s awesome to be back.”

If his history with the Cougars serves an accurate barometer for what lies ahead, Detmer’s playbook may lead to the scoreboard getting lit up early and often in the not-too-distant future. His West Coast, pro-style attack is a throwback to the offense that once catapulted BYU to national success under former coach LaVell Edwards.

The players who will be under Detmer’s direction are already warming up to his offensive philosophy and coaching style.

“It’s everything that people think it’s like,” sophomore quarterback Tanner Mangum said. “He’s very smart. Very good at teaching. He’s a teacher. He’s going to help you understand things and help you process things, making sure it’s simple. He’s been there. He played in the NFL for 14 years. He’s been around the game a long time, so he knows how to coach it and how to teach it.”

Detmer made the rare leap from high school head coach to offensive coordinator at an FBS school. Only a handful of coaches have done it, with the most prominent example being Auburn coach Gus Malzalan when he joined Arkansas in 2006. Making such an adjustment can be difficult.

“This is my first go-around with college football. To have guys with experience around you to bounce things off of and ask questions, all of those things have been huge for me. We’re all blessed to have each other and the experiences we’ve had in different places.” —Ty Detmer, BYU offensive coordinator

One thing in Detmer’s favor is his NFL experience. He played under multiple offensive coordinators during his pro career and Detmer silently observed what each one did to put together an offense. All of those coaches have molded a portion of his own approach to coaching.

“You take the organization from some coaches,” Detmer said. “You take how they did things to help their players. At every level, you’ve got guys who are better at one thing than another.”

Detmer certainly knows from experience how a potent offense should operate. He threw for more than 4,000 yards in each of his final three seasons at BYU — including a school record 5,188 yards during his Heisman Trophy winning season in 1990. His 15,031 career passing yards still ranks in the Top 5 in NCAA history and his 121 career touchdowns ranks in the Top 10.

How that translates to directing an offense as a coach remains to be seen. Detmer acknowledges his deep inexperience as an FBS coach, but he also feels like he can lean on the other BYU coaches to help bring him up to speed.

“This is my first go-around with college football,” Detmer said. “To have guys with experience around you to bounce things off of and ask questions, all of those things have been huge for me. We’re all blessed to have each other and the experiences we’ve had in different places.”

One thing Detmer has promised to do as an offensive coordinator is play to the strengths of his players. He has no intention of forcing them to adapt to his system. His playbook is designed to be molded to incorporate what they do best.

The players already love what brief glimpses they have seen in spring camp. Detmer only installed some basic packages while introducing the new offense to the Cougars, but it already promises to open things up both on the ground and through the air.

“We got a lot of plays that are the same, but we do them in different formations and things that you would never (expect),” senior running back Jamaal Williams said. “You would think they’re different plays, but they’re not. Ty is a great coach. He shows us what to do. He keeps it simple for us.”

The next step for Detmer and BYU will be deciding on a quarterback. Both Taysom Hill and Tanner Mangum could start for many FBS teams. Instead, both are going head-to-head for the starting job in Provo.

Both players offer convincing arguments for starting in 2016. Hill is the school’s career leader in quarterback rushing yards (2,212). He also threw for 2,938 yards and 19 touchdowns in 2013 — his only season not cut short by injuries. Mangum set BYU freshman records by throwing for 3,377 yards and 23 touchdowns. He had five games with 300 or more passing yards in 2015.

Regardless of whichever player wins out, both feel confident the team will be in good hands operating under Detmer’s offense.

“Ty clearly knows football,” Hill said. “He’s been around football for an extremely long time.  Having the exposure to the NFL and knowing what it takes at that level — and then to come here and share that knowledge with us — has been invaluable to us.”

Why I don’t give my kids 100 percent Previous post