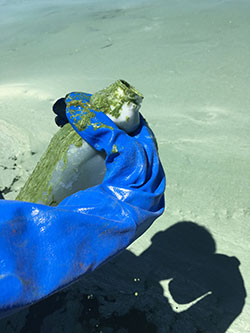 Lab results from a test by the Utah Department of Environmental Quality (DEQ) showed the algal cell count as three times the threshold for a closed body of water. The algal bloom covers about 90 percent of Utah Lake.

The lake has been closed until further notice because of the increased health risks to both humans and animals.

“Water with these levels of concentration in the algal bloom pose serious health risks,” said Ralph Clegg, Executive Director of the Utah County Health Department in a press release. “To protect the health of people and animals that use the lake, it is necessary for the lake to remain closed until it is safe for recreation.”

Anyone concerned with exposure to Utah Lake’s algal bloom should contact their doctor of Utah Poison Control at (800) 222-1222. For concerns about animals, call their veterinarian.

Signs have been posted in some areas around Utah Lake; however, not all areas may have signs. The DEQ warns that, despite areas not having signs, the lake is closed for the public’s safety until another announcement is made.

“While algae may not always be visible on the lake, the threat to human and animal health can still be present. Toxins can persist in the water for several days after algae dissipate,” said Erica Gaddis, assistant water quality director for DEQ, in a press release. “One of the ways we protect the health of people and animals is by testing water for the presence of toxin producing algal species.”

Algal blooms are caused by high level of nutrients in the water combined with warm weather, sunlight and calm water, according to the DEQ. Wastewater treatments are one of the largest nutrient contributors to Utah Lake followed by fertilizer runoff. These bright-green or blue-green blooms produce harmful toxins called cyanobacteria. Symptoms include headache, diarrhea, fever, abdominal pain, nausea, vomiting and skin rashes.

Dr. Joseph Miner, executive director of the Utah Department of Health, warned, “These types of algae release neurotoxins and hepatotoxins, that can affect brain, nervous system, and liver function.”

If you have caught fish in Utah Lake since July 10, 2016, state officials recommend not eating the fish. They also recommend not fishing at rivers near Utah Lake.

DEQ began testing the lake on Wednesday after a recreational lake-goer spotted a large algal bloom extending from Provo Bay to State Park Harbor. This is the first time the entire lake has been closed.

For more information on the algal bloom at Utah Lake, visit deq.utah.gov.

50 reasons to be excited for BYU football Previous post