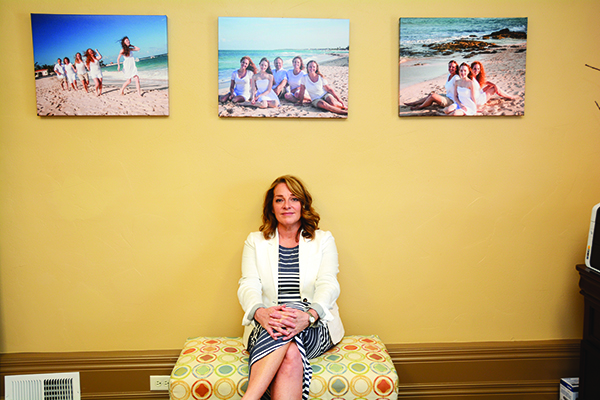 Within just a few decades, Kathleen Lopez escaped an abusive relationship, remarried, supported her family through her husband’s job loss and lost her son to suicide. She relied on her faith and family to survive — and her favorite quote by Elizabeth Browning: “My sun sets to rise again,” reminding her that light does come at the end of darkness. (Photo by Alisha Gallagher)

This is one of a five-story series, “Empower Hour,” for Utah Valley Magazine.

Late one night more than 30 years ago, Kathleen Lopez found herself living a nightmare.

The man she was engaged to marry in California had become physically and emotionally abusive, and that night, she knew she had to protect herself and her six-month-old boy, Preston.

“I was seriously afraid for my life,” Kathleen says. “He started hitting, punching and kicking me while I was holding Preston in my lap. After a year of enduring abuse, I finally realized it was never going to stop. I thought, ‘I have to get out of here.’ So in the middle of the night I took a few things for the baby and left with what I had on my back.”

Kathleen took refuge in a battered women’s shelter, where counselors and legal professionals became her safety net. After three months of physical and emotional healing, she began looking to the future. She left the shelter — and with no job or college education, she was completely starting over.

She moved in with her parents (in a gated community), found a job in real estate, and one year later started volunteering at the women’s shelter — her former refuge.

“It took me a year to look a man in the eye without shaking,” Kathleen says. “So I went there to encourage the women that they can recover. Having just been through it myself, I knew they felt trapped and afraid. It was important for me to let them know they could get out and move forward.”

“We’ve let our hard times work through us instead of letting it weigh us down. There are some things we can’t control, so I am learning to be happy with what I can do.” —Kathleen Lopez

She took classes at a community college where she met a man she wasn’t looking for — her future husband. One waltz down the aisle and three daughters later they moved to Highland, and Kathleen founded Sentinel Sales and Management, a real estate sales and property management company, in American Fork and continued pursuing her degree.

Five years later, tragedy struck again. Her husband lost his job. Then her 24-year-old son, Preston, who she had sacrificed everything for to protect him from the abuser, committed suicide after battling a brain disease for seven years. Her world was turned upside down once again.

“His death was the most trying time of my life,” Kathleen says. “I don’t know how I would have been able to get through that without my faith.”

Having joined The Church of Jesus Christ of Latter-day Saints 20 years ago, she says personal spiritual experiences and comfort from family members helped her put one foot in front of the other even when she couldn’t see through her tears.

“There are times in everyone’s lives where you don’t feel strong enough to handle the grief of a trial,” Kathleen says. “But somehow you do.”

Today Kathleen works as president of her company, and her husband William works as vice president at her side. Kathleen is proud to live a simple and fulfilling life, full of gardening, practicing yoga and hiking. While her kids were young, her hobbies were their hobbies — and even though they are grown, she still seizes every chance to be with them.

“We’ve let our hard times work through us instead of letting it weigh us down,” Kathleen says. “There are some things we can’t control, so I am learning to be happy with what I can do.”

An hour a day

Having escaped an abusive relationship and endured the loss of her son, Kathleen Lopez has had to relearn even the simplest things.

“One person told me, ‘You look so nice when you smile!’ which, to me, meant I wasn’t smiling enough,” Kathleen says. “I’ve had to work at smiling and finding joy again.”

Kathleen has rediscovered joy one hour at a time — by exercising, expressing gratitude and serving. She says an hour of exercise boosts her self-esteem, and she makes an effort to sprinkle expressions of gratitude throughout her day.

“I am trying to slow down and take time to recognize the good things in my life, however small — like Foxy, our four-pound Yorkie,” Kathleen says. “Acknowledging those little things every day means more than only seeing the big things every once in a while.”

Everyone deserves a chance to play: Mapleton's special needs league is for VIPs Next post