Archers and traps likely will take out deer in Provo 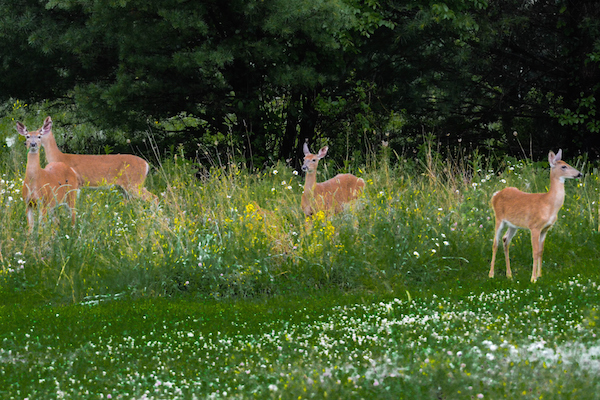 Provo has approved areas of the city for deer removal. (Stock photo)

Provo might have archers killing deer in approved areas of the city. Or there might be traps set up to take and move deer to other parts of the state. But most likely there will be both.

After a long discussion on Tuesday night, the Provo council unanimously decided to let the mayor’s office spend $35,000 on removing deer from the city, either via traps and relocation or killing. The city got approval in June from the state Division of Wildlife Resources to implement either a lethal or non-lethal deer program.

The council went back-and-forth over whether Provo should have a lethal deer program, a non-lethal one or a combination, which would be more effective and humane and what residents want. They also debated whether the city should pay to process the deer meat and then donate it to the needy, or offer the deer meat to residents for free, if they’re willing to take it and process it.

Councilwoman Kim Santiago and Councilman George Stewart said their constituents want the city to start doing something about the urban deer population.

Every year, there’s an estimated $450,000 in damage from deer vs. car accidents.

Santiago, who lives in the foothills of Provo, said she’s had deer impaled on her fence and one of her relatives hit and killed a deer. “To hear the crying that they make when impaled, it’s not a pleasant experience for my children to hear that.”

She said it’s a public safety issue — predators are coming into the city to kill deer, and there also are the traffic accidents. The average deer vs. car accident costs $3,000 and that doesn’t include human injuries.

Between January 2013 and June 2015 there were more than 80 incidents in Provo involving deer that caused $500 or more in damage, said Bryce Mumford, council policy analyst. Every year, there’s an estimated $450,000 in damage from deer vs. car accidents. And deer cause an estimated $300,000 in property damage in Provo every year.

The mayor’s office will likely contract with Brian Cook of Humphries Archery, which has run the lethal deer removal program in Highland. In that city, residents take the meat — the state requires the deer meat be used; it can’t be wasted.

Humphries, if the city uses the company, will set up cameras to track deer, set up locations and kill the deer, Cook said. All the archers use marked arrows, so there’s never any question what killed an animal or where an arrow came from.

Santiago said the company has never lost an arrow or a deer.

Now that the city has approved a program, the mayor’s office will decide which program to use and where, choose the contractor and how meat will be used.