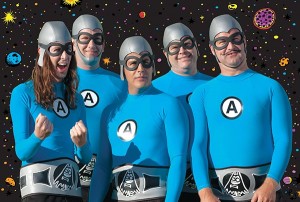 It’s a Friday night in downtown Provo, and a bucking brigade of masked men in rubber helmets and spandex are taking over Center Street. Is it a new cosplay game? A workout flash mob? A new breed of Pokemon to capture?

It’s the Aquabats, a popular spoof-ska-band-turned-television-stars who are headlining August’s Rooftop Concert Series. The band will reunite with fellow 1990s ska scene favorites My Man Friday and up-and-coming band Mad Max and the Wild Ones during the concert at 7:30 p.m. Friday, Aug. 5, at the intersection of Center Street and 100 West in Provo.

Bringing the Aquabats and My Man Friday back to Provo is a return to the roots of the Provo music scene, which first launched with the sounds of ska music in the 1990s.

A ska reunion show has been a longtime goal of Rooftop Concert Series CEO Sarah Wiley, according to concert series co-founder Courtney Kendrick.

“Because our ska bands were really the first ones to build the Provo music scene, it seemed fitting to have a Rooftop ska night,” Kendrick said.

Ska swept Utah Valley in the 1990s, with its brass-tinged beats and vibrant sound, according to Corey Fox, who owns Velour Live Music Gallery. Fox said the ska explosion laid the foundation for Utah Valley’s current music scene, both by putting Provo on the national touring map — including nationally known acts like No Doubt and The Mighty, Mighty Bosstones — and by cultivating local talents like Branden Campbell of Neon Trees and Ronnie Vannucci of The Killers, who both got their start in Attaboy Skip.

“Our kids found our pictures and CDs and got interested in it, so it encouraged my wife and myself to keep doing it for kids … We’re really just big kids ourselves.” —Christian Jacobs, The Bat Commander in The Aquabats

Among the acts that would come to town for big ska-centric events like Ska Patrick’s Day and Skalloween were The Aquabats, a Southern California band with personal ties to the Provo area.

Aquabats frontman Christian Jacobs — also known as The Bat Commander — describes the band as “low-rent superheroes” who were into cosplay before cosplay was a thing. The band started as a spoof ska group to get band members into cool concerts without a cover charge in 1994 but took on momentum, hitting national airwaves in the late 1990s with hits like “Super Rad!”

Two decades later, the band is still around — in large part thanks to the family life they thought would displace band life, Jacobs said.

“I always intended on settling down and having kids, but somehow we had families and kids but didn’t settle down in normal sense of ‘I’m a dad now, I can’t put on a rubber hat and jump around on stage,’” Jacobs said. “Our kids found our pictures and CDs and got interested in it, so it encouraged my wife and myself to keep doing it for kids … providing some kind of entertainment where we can be rowdy and still feel safe taking kids to the show. We’re really just big kids ourselves.”

The kid-friendly focus that also sparked Jacobs to create preschooler hit television series “Yo Gabba Gabba!” and “The Aquabats! Super Show!” introduced the band to a new generation of fans.

“When I meet a 3 year old who has no idea of our history or ska or any preconceived notions we’re supposed to meet, and they’re stoked to meet the Bat Commander or Ricky Fitness, I feel the show worked,” Jacobs said. “We aimed to entertain kids, and it worked.”

Among the young fan base is Kendrick’s 8-year-old son, who she says is “obsessed” with watching the band on Netflix.

“My hope for this show is it will bring out kids,” she said. “I know mine have been so excited since we told them at the beginning of summer. They know all their (The Aquabats’) songs, and I look forward to watching them sing along.”

Mormons to watch at the 2016 Rio Olympic Games Previous post

A swindling, musical business in the mountains; Aquabats ska-tle Provo Next post