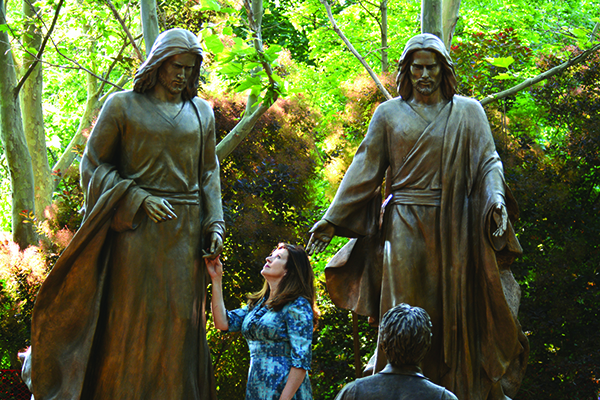 “This Is My Beloved Son” is the only non-New Testament depiction in the Light of the World Garden and represents Joseph Smith’s experience known as the First Vision in the LDS faith. The surrounding grove was not created for this sculpture location. This tree-lined area is tucked on the west side of the exhibit, which is in the former Butterfly Garden.

This is one of a five-story series, “Empower Hour,” for Utah Valley Magazine.

Growing up on a dairy farm in Montana, Angela Johnson was inspired by the classical music her mother played in their home. She heard “the power and freedom” in the voices of prima donnas and longed to create those sounds.

“At my first lesson at age 13, I said I wanted to learn a song from ‘Madame Butterfly,’” she remembers.

Angela married at age 18, had four children and continued to seek out vocal training. She then became the teacher as she taught at BYU’s Education Week. Not one to be satisfied with repetitive experiences, Angela spread her artistic wings by doing dramatic presentations and mono acts in addition to teaching music classes.

This desire to avoid monotony in her life tasks followed her into her largest project to date — sculpting the life of Christ.

“I sculpted so many beards of the Savior that I hope I don’t do another beard my whole life,” she smiles. “That’s why Peter doesn’t have a beard.”

But let’s back up to the beginning of when the music decrescendoed and was transposed into an unexpected artistic crossroads.

Highland’s Angela Johnson is the artist behind the sculpture garden opening at Thanksgiving Point.

In Angela’s late 30s, she sat down at the piano and began to vocalize. An energy impacted her in the chest and a shock wave passed through her.

“Through this experience, I learned that I would never accomplish my vocal goals of singing at the Met,” she says. “I was devastated. The scaffolding inside me crumbled, and I went into shock.”

What happened next wasn’t a logical decision on the part of this mother of four. She says she was guided to the art supply store where she bought one block of water-based clay and one sculpting tool. Five minutes later, she walked out and headed home, where she pulled down the plastic on the clay and both hands went in simultaneously.

“I began grabbing clay and sculpting,” Angela says. “I didn’t determine beforehand what I was going to do, but I sculpted a portrait bust of a young girl in pain. It was like an intelligence in my hands I’d never felt before. And I knew it was time for me to develop my talent.”

The music was now coming out of her at a different tempo and with the sound of clay flying. Soon, Angela had completed 12 private commissions. In 2003, she prayed about what to do with her sculpting gifts.

“A concept distilled on my soul that I was to create a sculpture garden depicting Jesus Christ,” she says. “I was captivated and enthralled by it. It was something I could physically sense.”

At the time, Angela didn’t see any of the scenes that she would bring to life. She took responsibility to determine which parts of the Savior’s life to share in artistic form.

In 2007, Angela had created mockettes of the Savior’s life, and she was invited to be a guest artist at an event held at Karen Ashton’s cabin. Karen, who founded Thanksgiving Point along with her husband, Alan, was enthralled with the project and Thanksgiving Point became the home for Angela’s mockette sculptures with plans to present the depictions in monument size within Thanksgiving Point Gardens.

“We wanted to determine the right scale for the garden area,” she says. “I wanted a size that people could relate to — not heroic or oversized. And I didn’t want nature to dwarf them either. We had to find the right balance.” 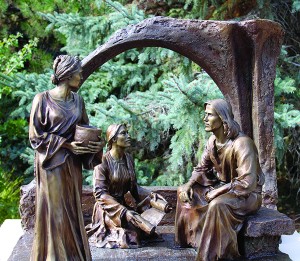 Seven of Angela Johnson’s 15 scenes include women, such as “One Thing Is Needful,” which depicts Mary and Martha.

Computer software enlarged her sculptures, which creates about 60 percent of the finished shape. The final 40 percent is chipped away to perfection by Angela and a small team of assistants.

“I have visualized Jesus Christ since I was a little girl,” she says. “The brilliance of his soul needs to be reflected in my work — the penetrating look in his eyes and the attentive expression in his face. Christ was someone who listened and focused. He wasn’t distracted, and that’s why people loved him. His glance went through them.”

The sculpture garden now includes 15 scenes, with 14 references coming from the New Testament. The 15th is the First Vision. The scene portrays the Savior, his father and Joseph Smith interacting in the Sacred Grove in 1820.

Angela says music is part of each sculpture and can be felt and heard by astute visitors. For her, this project has enveloped more than a decade and she’s learned life lessons beyond what she could imagine.

“For example, with our opening statue of Christ walking on the water, I had to pick a quadrant of water and work on it,” she says. “I would put clay in this corner and that corner, and I would begin weaving the whole thing together. We can’t swallow a whole project at a time or we get defeated and overwhelmed. We weave.”

Each of the scenes is sponsored by a generous community member. Marilyn Victor was the first to step forward and put her contribution toward “Be Not Afraid.”

“She made a statement by doing that,” Angela says. “There are people who God has blessed with means who have seen the validity of this project.”

The Light of the World sculpture garden anticipates a soft opening in August and an official opening in September. The sculptures will be part of the Thanksgiving Point Gardens ticket.

“Don’t fall into the trap of being immobilized because you don’t know how to do something perfectly.” —Angela Johnson, sculptor

An hour a day

Angela Johnson is passionate about helping women develop talents. In fact, she’s working on a book about the subject. Here are four tips for bringing it out from under a bushel.

1. Remove toxic influences in your life. “We talk about pollution in our environment,” Angela says. “But we also need to stay away from people with hidden agendas or the desire to control us. To develop ourselves and our talents, we need to be surrounded by healthy voices.”

2. Do something hard. “If singing in the choir is hard, do it! If singing a solo in church is more than you think you can do, start by singing to your dog or singing in the mirror,” she says.

“Pick a hard task that intrigues you enough so that you’re willing to work at it. You’ll realize that you didn’t die and that it was actually fun,” she says.

3. Embrace mistakes. “Don’t fall into the trap of being immobilized because you don’t know how to do something perfectly,” she says. “In the beginning, I didn’t like some of my sculptures but I said, ‘This will not intimidate me!’”

4. Don’t say to yourself or others: “You can accomplish anything you set your mind to.” “That’s actually a lie,” Angela says. “We may not be able to win an Olympic gold medal. We have limitations.” Instead, Angela says to tell others, “Let’s explore things together. Let’s talk about your creative zone.”

Generous donors have sponsored scenes in the Light of the World Garden. Two depictions are still looking for donors. For more information, visit lightoftheworldgarden.com.