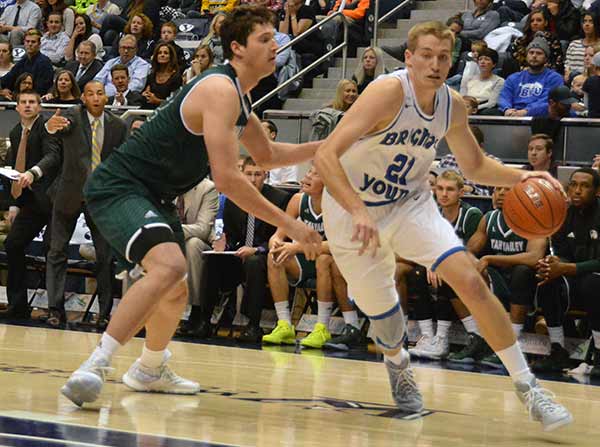 BYU junior Kyle Davis drives to the basket during a game against Utah Valley University in a 2015 game. (Photo by Rebecca Lane)

The West Coast Conference announced the men’s and women’s basketball schedules for the 2016–17 season on Wednesday morning.

BYU men’s basketball will begin conference play on Thursday, Dec. 29, against Santa Clara at the Marriott Center while the women’s team will take on Santa Clara in California.

BYU women’s basketball is the defending WCC regular season champions, but BYU women’s head coach Jeff Judkins says the change in schedule this year will make it even harder to earn the title.

“This year’s WCC race will be a little different because without travel partners we’ll have a home and an away game each week for the majority of the season,” Judkins said in a press release. “The race for a regular season crown will be wide open this year and we’ll need to come prepared and be ready to play each game.”

The women’s team has their first in-conference home game on Thursday, Jan. 5, against Saint Mary’s.

“The race for a regular season crown will be wide open this year and we’ll need to come prepared and be ready to play each game.” —Jeff Judkins, BYU women’s head basketball coach

On Jan. 12, the Cougars meet up with San Francisco, which snagged the WCC Conference Championship from the No. 1-ranked Cougars in the 2016 championship game, in San Francisco. The teams face off again in Provo on Saturday, Feb. 11.

Outside of conference play, the women’s basketball team will play against some top ranked teams.

“This year’s schedule is just as difficult as the one we had last year,” said Judkins in a press release.

“We are excited to be playing some stiff competition in our non-conference portion of the schedule. We will also have a couple of huge home games against Oklahoma, from the Big 12 and Washington, from the Pac-12.”

“We’re pleased with the nonconference schedule we’ve put together,” BYU coach Dave Rose said in a press release. “We look forward to the challenges that will help prepare us for league play. Our team is really excited for the season.”

In December, the Cougars will participate in Basketball Hall of Fame’s 2016 Hoophall LA at the Staples Center.

The Cougars won’t take on in-conference foe Gonzaga until Thursday, Feb. 2, in the Marriott Center. Two weeks later the Cougars will travel to Washington for the final game of conference play against the Zags on Saturday, Feb. 25. 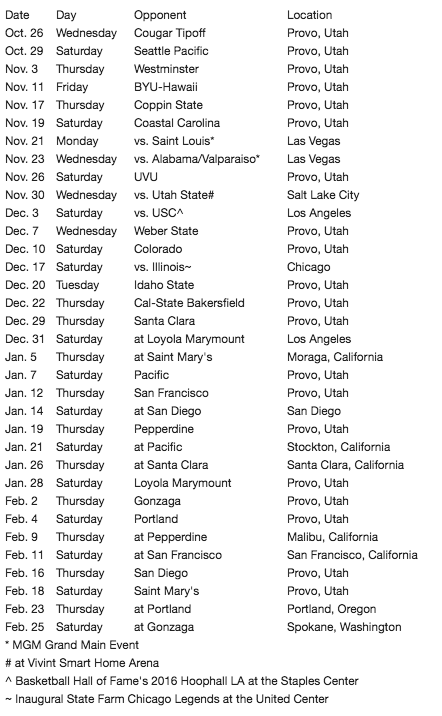 Quiz: How well do you lineup with the 2016 Cougars? Previous post