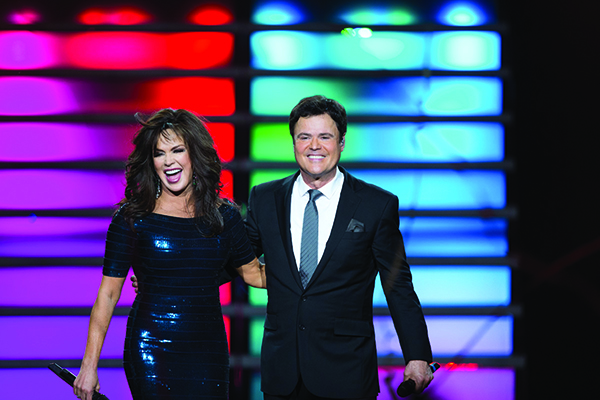 Donny and Marie have crooned, cackled and danced alongside each other their whole lives. The two siblings are in their eighth year of performing together five nights a week at The Flamingo in Las Vegas. They have a template for their show each night, but 50 percent of the show is ad lib, including spontaneous audience interaction and playful sibling rivalry — especially when joking about “Dancing With the Stars,” which Donny won. (Photo courtesy Caesars Entertainment)

One of the unofficial traditions in my family growing up in Utah happened pretty much every Friday night.

My parents would buy or make pizza and we’d sit around the television set and watch the Donny & Marie Show that aired in the 1970s on ABC.

I didn’t know much about the singing Osmond family back then. I didn’t appreciate their garish outfits, corny gags, and funky dance moves. I wasn’t familiar with many of the songs they sang.

All I knew about them was that they were members of my Church. They were Mormons. So we watched faithfully every week.

It was like an elaborate, nationally televised Road Show.

There was something comforting and soothing about that program. In Donny & Marie’s world, everything was idyllic. There were lots of toothy smiles and laughs. The Osmonds were singing-and-dancing emissaries of the Mormon Church. And they were a big deal.

May tomorrow be a perfect day

May you find love and laughter along the way

May God keep you in His tender care

Until He brings us together again.

Then, in unison, they’d say, “Goodnight everybody!”

It was wholesome, feel-good fare that made you think that the world was a very carefree, happy place.

I was too young to have a secret crush on Marie, like a lot of Mormon boys did at that time. But later, her stock rose in my eyes when I learned she married Steve Craig, who helped Danny Ainge lead BYU to Sweet 16 of the 1981 NCAA basketball tournament.

After the Donny & Marie show went off the air, the Osmonds moved into different phases of their entertainment careers. I lost track of them, and I think a lot of other people did, too.

While I was serving my mission in South America, Donny Osmond’s song “Soldier of Love” came out. I remember thinking, as a missionary, that he had gone off the deep end. I vowed to teach him the discussions when I got home. Turned out, I didn’t need to worry about Donny. Still, both he and Marie have gone through their share of trials and tragedies since the 1970s.

In Donny & Marie’s real world, it turned out, not everything was idyllic.

But they are the most successful brother and sister act of all time. Their popular show in Las Vegas was voted “The Best Show in Vegas” by the readers of the Las Vegas Review-Journal four years in a row.

When I received tickets for the Donny & Marie Show at The Flamingo in Las Vegas recently, I jumped at the chance to go. My kids, of course, had no idea about Donny & Marie.

So when I received tickets for the Donny & Marie Show at The Flamingo in Las Vegas recently, I jumped at the chance to go. My kids, of course, had no idea about Donny & Marie.

They resisted and didn’t want to attend the concert, no matter how much my wife and I told them how cool it would be.

I learned quickly that even today, the Osmonds and the Mormons are inextricably connected. As we sat in a booth in the intimate setting near the stage at The Flamingo, waiting for the show to start, a maître de asked my 12-year-old son where he was from.

The man had probably heard that response a million times. “Are you a Mormon?” he asked with a smile.

Once the show started, I was impressed by the energy and passion Donny & Marie exhibited, even though they are well into their 50s. They poked fun of themselves and joked about how those under the age of 40 have no clue who they are.

At one point, after singing a high-cardio song and dance routine, Marie paused and drank an entire bottle of water in one swallow.

Marie’s first country hit, “Paper Roses,” reached No. 1 on the Billboard charts in 1973. She was 12 years old. And, yes, she can still sing. She’s got amazing range. She’s not just a little bit country. She’s a little bit of everything — including pop, jazz, blues and opera — in that golden voice.

Donny, who still lives with his family in Utah County, had a 50-something woman in the front row crying like a teenager. When he stepped off the stage and serenaded her while sitting on her lap, I thought she was going to pass out. Later, she gushed to Donny, “I’ve waited 50 years for this!”

Donny had a 50-something woman in the front row crying like a teenager. When he stepped off the stage and serenaded her while sitting on her lap, I thought she was going to pass out.

In an attempt to explain how big a star Donny & Marie were to my kids, I told them that Donny was so popular, he couldn’t serve a mission.

“It would have been nice to be able to have served a regular full-time mission,” Donny once wrote, “but when I was of that age, my career was such that everyone, including my parents and the leaders of the Church, thought that I could do a lot of good in the world by continuing being in the public eye, by living an exemplary life and sharing my beliefs in every way that I could.”

During the show, Donny shared how at one point in his career, as he was trying to make a comeback, that a publicist suggested that Donny get arrested for drug possession at an airport in an attempt to change his squeaky-clean image. Of course, he didn’t do that.

“How would I explain that to my kids?” Donny said.

Donny and Marie exchanged wisecracks throughout the show, just like they did on TV 40 years ago. Donny reminded the audience about his first-place finish in “Dancing With the Stars” a few years ago, while reminding the audience that Marie finished third.

Their songs were interspersed with video montages of previous performances from years ago with stars like Bob Hope, Michael Jackson and Andy Williams.

It was clear that they are comfortable with themselves, their beliefs and even the stereotypes about them. They’ve embraced what they meant to people decades ago and while they did perform modern songs, they understand what brings people to their concerts. So they sang some of their old hits, including Donny’s “Go Away Little Girl.”  And, yes, he even sang “Puppy Love,” which had the woman in the front row swooning.

Donny and Marie explained that their show in Vegas started as a six-week special engagement in 2008. But eight years later, it’s still going strong.

Toward the end of the 90-minute show, Donny and Marie mingled among the audience and interacted with us. At one point, Marie wandered around and drew giant lips (the top of the lip was an “M”) with lipstick on the foreheads of several men. I was one of the “lucky” ones who got the treatment. I never expected to get “kissed” by Marie.

“I’ll never wash my forehead again,” I joked with my family. My wife wasn’t amused.

I was thoroughly entertained that night and the 90 minutes flew by. When it was over, I was disappointed it didn’t go on longer. Though my kids wouldn’t admit that they liked the show, I could tell they were entertained.

It was wholesome, feel-good fare that made you think that the world was a very carefree and happy place, just like their old TV show.

Read the 2016 May/June cover story on Donny Osmond here to find out what Donny is up to today.