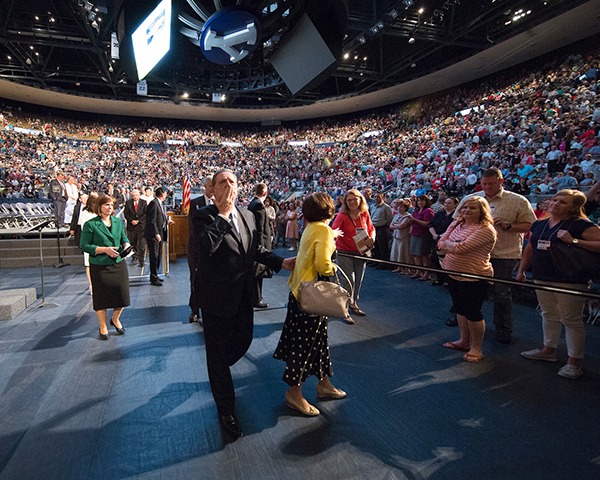 Elder Jeffrey R. Holland blows a kiss to the crowd at the Marriott Center after his BYU Education Week Devotional on Tuesday morning.
(Photo by Mark A. Philbrick/BYU Photo)

In a world that is seemingly getting less religious, Elder Holland used the speech to address a concern for the direction and attitude of society toward religion as it relates to a study from the 90s by Will and Ariel Durrant. The Durrants said, “There is no significant example in history of (any) society successfully maintaining moral life without the aid of religion.”

Elder Holland, an apostle for The Church of Jesus Christ of Latter-day Saints, expounded on the warning saying, “If we are not careful, we may find religion at the margins of society rather than the center of it, where religious beliefs and all the good works those beliefs have generated may be tolerated privately but not admitted (or at least not encouraged) publicly.”

To illustrate the point that a moral society needs religion as an influence, Elder Holland shared a heavily annotated devotional acknowledging literary, political and religious leaders who were influenced by the guidance of their faith.

“Voices of religious faith have elevated our vision, deepened our human conversation, and strengthened both our personal and collective aspiration since time began.” —Elder Jeffrey R. Holland

“Just to remind us how rich the ambiance of religion is in the Western culture and because this is Education Week, may I mention just a few of the great religiously-influenced, non-LDS pieces of literature that I met while pursuing my education on this campus 50 years ago, provincial and dated as my list is,” Elder Holland said. “I do so stressing how barren our lives would be had there not been the freedom for writers, artists, and musicians to embrace and express religious values or discuss religious issues.”

Elder Holland began with the literary leaders, including:

6. “The Scarlet Letter” by Nathaniel Hawthorne

7. “The Adventures of Huckleberry Finn” by Mark Twain 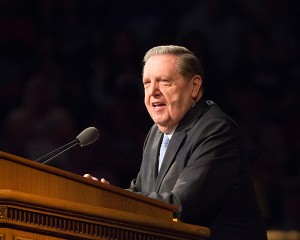 Elder Holland addressed a concern he had after reading a study by Will and Ariel Durrant. The Durrants said, “There is no significant example in history of (any) society successfully maintaining moral life without the aid of religion.”
(Photo by Mark A. Philbrick/BYU Photo)

Shortly after recognizing literary influences in the religious sector, Elder Holland continue to recognize evangelical leaders and political leaders — both past and modern — who paved the path, driven by faith and preserving or creating religious freedom.

10. John Wesley: An Anglican cleric and theologian in the 1700s

12. Pope Francis: The current pope for the Catholic church

14. Nicholas Ridley and Hugh Latimer: Burned at the stake in Oxford for their conviction of the Bible

These examples were used to illustrate how history has been influenced by religion.

“So the core landscape of history has been sketched by the pen and brush and words of those who invoke a Divine Creator’s involvement in our lives and who count on the religion  to bind up our wounds and help us hold things together,” Elder Holland said.

Elder Holland emphasized that religion is what makes people better and drives people to do good.

“Voices of religious faith have elevated our vision, deepened our human conversation, and strengthened both our personal and collective aspiration since time began,” Elder Holland said.